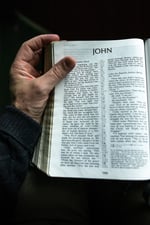 Even as a child, I was drawn to what was called at Mass “the Last Gospel”—the Gospel of John, chapter 1, verses 1-14, that that the celebrant recited before the final blessing and dismissal. As I wrote in an earlier post, I miss hearing that passage at Mass and wish it had not been taken out. It is not just the cadence of the reading, although I do like that; I think it’s the progression, the build up to the magnificent climax—that the Word became flesh.

This is a wonderful gospel passage with which to pray during this season of Advent.

I love to listen to words. They are informative, soothing, inspirational, and thought-provoking. So is the Word of God! Jesus was there, in the beginning, right from the start of creation.

Life and light! Topics of discussion especially during this pandemic year! People are taking great measures to be safe from infection and protect their precious gift of life. So many families are putting up their Christmas lights earlier than usual to brighten their spirits. If we turn to Jesus in prayer, he is the best Light of all. He shows us how to look at life. He is our loving Light-giver! If we feel overwhelmed by the darkness of fear or doubt, Jesus is right there to give us hope. He is more powerful!

Do we feel enlightened? When was the last time we gave someone fantastic news? I don’t mean news about a great pre-Christmas sale at a store. We have the privilege of testifying to the truth about Christmas. John the Baptist was a good example. He did not wear fancy clothes or speak with eloquence. He spoke the very good news about Jesus. He helped people prepare for Jesus’ coming. We can do that. We can encourage others with simple sentences, gentle gestures, and little life examples to copy. We can keep it simple yet effective. The Holy Spirit will help us. Who do you think is helping me write this blog?

He was in the world, and the world came into being through him;
yet the world did not know him.
He came to what was his own,
and his own people did not accept him.
But to all who received him, who believed in his name,
he gave power to become children of God,
who were born, not of blood or of the will of the flesh
or of the will of man, but of God.

The world spends a lot of time not knowing Jesus or ignoring him. Jesus gives us power to live as children of God. How about just adding the name, Jesus, on the bottom of a wreath ribbon? How about an extra ornament that displays a nativity scene on the Christmas tree? Maybe an extra thank-you to Jesus for coming to live with us on earth when we say grace before meals?

And the Word became flesh and lived among us,
and we have seen his glory, the glory as of a father’s only son,
full of grace and truth.

Photo by James Coleman on Unsplash