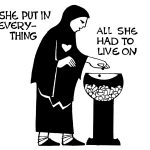 The scene here is very stark. There is a drought in the region. The prophet Elijah comes into the city and he is hungry and thirsty. He asks a poor widow who is at the point of starvation herself for water and some bread. She has no bread but only a small amount of flour and oil. Yet, she has faith, and she feeds him; there is just enough left for her and her son. Then Elijah tells her, “For the Lord, the God of Israel says, ‘The jar of flour shall not go empty, nor the jug of oil run dry, until the day when the Lord sends rain upon the earth.’” The widow is a woman of faith, and God is with her.

Today, drought threatens the lives of countless millions in dozens of countries all over the world—especially in Africa, the Middle East, and parts of Asia. It causes mass migrations, malnutrition, and endless political strife and violence. Let us pray for today’s widows and poor families who suffer from hunger and poverty caused by droughts and floods and crop erosion, and let us use our own water resources wisely.

“Praise the Lord, my soul.” We often pray to God and ask for help and forgiveness. Wonderful! Perhaps, sometimes we can simply offer a prayer of praise to God. It is not that God needs it but rather that we need it in order to enrich our souls.

The author makes an important connection between the death of Jesus and our own deaths. “But now once for all he has appeared at the end of the ages to take away sin by his sacrifice. Just as it is appointed that human beings die once, and after this the judgement, so also Christ, offered once to take away the sins of many, will appear a second time, not to take away sin but to bring salvation to those who eagerly await him.”

The death and resurrection of Jesus radically changes our own deaths. It was not the end for him, and it will not be the end for us but rather a new beginning, a new life. Jesus the man died. Jesus the Son of God lives forever, and so will we. Have you ever thought much about this amazing gift? Please let the power of this gift enliven you every day, especially in times when you are troubled or feel alone.

Here, Jesus is not gentle. He is challenging: “Beware of the scribes, who like to go around in long robes and accept greetings in the marketplaces, seats of honor in synagogues, and places of honor at banquets. They devour the houses of widows and, as a pretext recite lengthy prayers. They will receive a very severe condemnation.”

Throughout the history of Israel, widows and orphans had a special place in society, because they were economically dependent on the community. The scribes were supposed to take care of them but did not always do their duty. One of the reasons that the scribes were so against Jesus was that he called them out, and they did not like it.

Later in this reading, Jesus talks about people contributing to the Temple: “Many rich people put in large sums. A poor widow also came and put in two small coins worth a few cents. Calling his disciples to himself he said to them, ‘Amen, I say to you, this poor widow put in more than all the contributions to the treasury. For they have all contributed from their surplus wealth, but she, from her poverty, has contributed all she had, her whole livelihood.’” This woman’s gift has become famous throughout history as the “widow’s mite.” Sometimes, those who are the poorest are the most generous, not only in financial contributions but in the gift of their time and compassion. No matter how little we have, we can contribute in many other ways.