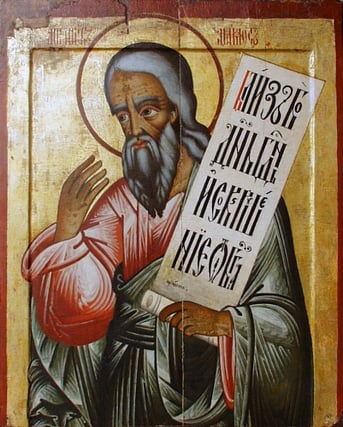 A reading from the prophecy of Amos

We tend to think of ancient Israel as a poor nation, and that is true. Most of the people were poor peasant farmers who barely got by and often were vulnerable to the whims of their landlords, seed providers, and more well-off merchants who cheated the poor families that depended on them for their livelihood.

Amos, teaching in the eighth century before the birth of Jesus, socks it to these predators: “The Lord has sworn by the pride of Jacob: Never will I forget a thing they have done!” This was a time of relative economic growth, but poor people saw little if any of that money. Sound familiar? One of the biggest issues in our society today is economic inequality. It is not only an economic concern but also a moral issue. People who are working hard, often at two or three minimum-wage jobs per family, are still poor and hungry in our rich country. Imagine what Amos would be saying today, how angry he would be. How should we, as followers of Jesus, act to overcome economic injustice in our society? Can we say that we are truly on the side of those who live in poverty?

“Praise the Lord who lifts up the poor.” How does God really lift up the poor unless we believers act as God’s partners here on earth?

A reading from St. Paul's letter to Timothy

The early Christians were not big fans of kings, the Roman emperor, and other officials, but the author of this letter calls upon Christians to pray “for kings and all authority.” He also asks the people to pray “without anger or argument.”

That was a difficult task then, and it is today, especially if we do not agree with our local, state, or national leaders. We can pray to change their minds, work to challenge their positions or their leadership within our democratic process, and join in an ongoing debate on the issues we hold dear.

One of the challenges posed by this passage is that Luke combines a parable with moral teachings. The parable begins with a theft. Most of the Palestinian farmland at the time of Jesus was controlled by royalty or super-rich absentee landowners. This landowner had hired a steward to administer his land, and the steward stole from him and then was caught. Afraid that he would lose his position or worse, the steward decided to make friends with the farmers who were his business contacts. He made deals with several, thinking that they would treat him right after he lost his job. It is unclear whether he lowered the price by giving the landowner less or that he gave up part of his own share. In any case, the landowner found out and surprisingly “commended that dishonest steward for for acting prudently.”

Jesus then goes into a long explanation of “the children of this world” making friends with dishonest wealth. The two moral teachings here are about being trustworthy with small matters and large, and, most important, about Jesus’ exhortation, “You cannot serve God and mammon.” Whatever is mammon? It seems to be a term for ill-gotten or dishonest wealth.

Almost every day we learn of one or more exampls of wealth that is not only excessive but acquired through dishonesty or out-and-out robbery with a fancy name. The people who swindled are all too often honest businesspeople and hard- working investors or consumers.

It is interesting how stories and moral teachings from 2,000 years ago are still relevant today.