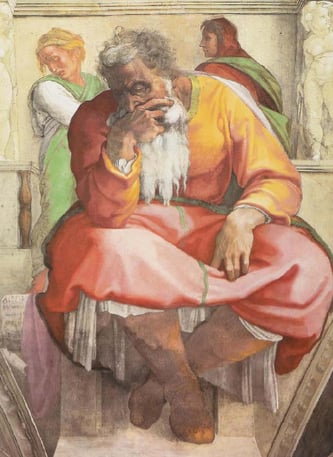 There is an old saying that “no prophet is honored or accepted in his own time.” That was certainly the case with Jeremiah who lived just before the Babylonian Exile of the Jewish people. Israel was surrounded by Egypt, Assyria, and Babylon—all more powerful kingdoms. Jeremiah tried to warn the people of Israel of their impending doom at the hands of one of these kingdoms, but the powers that ruled in Jerusalem vowed to stop him. “In those days the princes said to the king: ‘Jeremiah ought to be put to death; he is demoralizing the soldiers that are left in the city, and all the people, by speaking such things to them; he is not interested in the welfare of the people, but in their ruin.’” Zedekiah, who was a very weak king gave in to them. “And so they took Jeremiah and threw him into the cistern…. There was no water in the cistern, only mud, and Jeremiah sank into the mud.” They left him to die a horrible death, but Ebed-melech, a court official, asked the king to release Jeremiah, and the king agreed. Prophets of any age often have to proclaim bad news, and people often are not receptive. Jeremiah suffered throughout his life for speaking the truth as God revealed it to him, and the consequences for Israel were catastrophic.

For many years, climate change prophets have been warning us about the dangers of man-made pollution of our air, water, and land. Global warming has already caused rising sea levels and has compromised our food production and our air quality. In this case, the prophets are not just politicians with elections to win but scientists whose numbers have grown exponentially in the past decades, across the world and throughout the scientific community. How can we listen to their wisdom without panic but with real concern?

“Lord, come to my aid.” How often have you and I said that prayer in any number of ways? How often has it worked? Wait! Isn’t that the wrong question and the wrong approach? Our prayers are not always answered in our time and in exactly the way we desired. Prayer is not only “saying prayers”; often prayer consists of a deep openness to the Spirit within us which may help us to see the larger and long- term gifts that we are offered.

This was a challenging and dangerous time for Jewish converts. They were often thrown out of their synagogues and treated as traitors to their faith. And now, their Roman rulers had two things against them—being Jews and belonging to this new band of strange believers who met to worship their dead leader, Jesus Christ, and partake in his body and blood. That was madness to the Romans, who saw it as threatening to their rule.

The author tells the readers. “Let us rid ourselves of every burden and sin that clings to us and persevere in running the race that lies before us while keeping our eyes fixed on Jesus the leader and perfecter of faith.” It was a race for the people then to keep one step ahead of their persecutors. Thankfully, we do not live under persecutors, but sometimes our own lack of faith and the distractions of material things and personal crises can slow us down in our own race to follow Jesus Christ.

Many fire-and-brimstone preachers throughout history, including our own time, have used this text to justify their version of Jesus as a powerful, divisive, judgmental force in the world. “I have come to set the earth on fire, and how I wish it were already blazing! There is a baptism with which I must be baptized, and how great is my anguish until it is accomplished!” Of course, Jesus is talking about his death, which he knew was not going to be not peaceful but violent. That is the “baptism” that he is talking about.

Then he says something that many find shocking: “Do you think that I have come to establish peace on earth? No, I tell you but division. From now on a household of five will be divided, three against two and two against three.” Then he mentions a whole series of family divisions.

He had already experienced these divisions as he traveled the countryside, preaching and often having a meal with a family. Today, we call Jesus the Prince of Peace, but he was a most divisive figure, and he knew it. The divisions caused by his message—decisions to adopt or reject his gospel of mercy, love, and justice—were painful, as they are today in families all over the world. True peace comes not from the necessary accommodations we make in life but through the unselfish model taught and exemplified by Jesus who said that the whole law consisted of this: love God and love your neighbor.