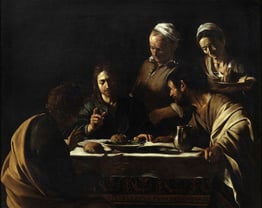 “My children, I am writing this to you so that you might not commit sin.” John is no longer the young man of the Gospels. Now he is an old man and the last of the apostles. There is a possible schism in one of the communities that John knows and loves. He wants them to know, “But if anyone does sin, we have an advocate with the Father, Jesus Christ, the righteous one. He is expiation for our sins, and not just for our sins only but for those of the whole world.” John wants them to know that “Whoever keeps his word, the love of God is truly perfected in him.”

Keeping God’s word for all of those years in the face of persecution and the death of all the other brother apostles must have been a daily challenge, especially in the face of divisions within the various communities. But John knew that the Spirit of God was in him always, as it is for each of us today.

Remember the story of the two travelers who met Jesus along the road. They went back to Jerusalem to share with others the encounter, “how Jesus was made known to them in the breaking of the bread.” Then, “While they were still speaking about this, he stood in their midst and said to them, ‘Peace be with you.’ … But they were startled and terrified and thought they were seeing a ghost. He said to them, “Why are you troubled? And why do questions arise in your hearts? Look at my hands and my feet, that it is myself. Touch me and see, because a ghost does not have flesh and bones as I have.” Just to be sure , Jesus asked them to give him a piece of fish, and he ate it. “Then he opened their minds to understand the scriptures. And he said to them, “Thus it is written that the Christ would suffer and rise from the dead on the third day and that repentance for the forgiveness of sins would be preached in his name to all the nations, beginning in Jerusalem. You are witnesses of these things.”

This is an important passage, because the tradition did not say that the Messiah would suffer and die cruelly. Luke wants everyone to know that this is a suffering Messiah who gave his life for his people and now suffers no more. This is the same Jesus who is with us in the midst of our own suffering. He knows what we are going through. He went through much more.