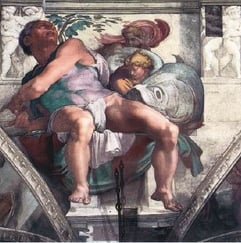 A reading from the Book of the Prophet Jonah

God asks Jonah to go to Nineveh, not a Jewish city but the capital of Assyria, an enemy of Israel, and preach a message of repentance. Repentance is a very powerful word used throughout the Bible. It does not mean changing your mind or being sorry for something. It means having a change of heart, a whole change of direction in your life. We often say we are sorry for something, but repentance involves our whole being focused on something very serious. This was the second time that Jonah had preached this message, so it must have been a difficult and dangerous mission.

Prophets were special people called by God to carry a message to people who had lost their way and were mired in sinfulness. Every age has its prophets, even though they are not necessarily called prophets. Think about people in our own time that you consider as prophets. Who would they be? How can you know that they are true prophets, not false prophets?

The response to these psalm verses is, “Teach me your ways O Lord.” This is a life-long process, learning God’s ways. We need to be open to new insights and callings from God. What we learned in the third grade or even last year needs to grow continually. How are you open to God’s ongoing message as God speaks to you every day in so many ways? Is there some new call that you believe God is sending to you? How should you respond?

A reading from the first Letter of Saint Paul to the Corinthians 7:29-31

“For the world in its present form is passing away.”

Paul was not the only one who thought Jesus was returning soon and that the world would soon end. People kept believed this long after Paul died, but gradually the truth set in. The Second Coming has no time table.

Imagine how challenging it was for the early Christians to adapt to this new reality. It must have tested their faith as much as the persecutions did. Some probably lost faith, but most did not, and they are our ancestors in faith. Let us remember them in times when our own faith is shaken.

A reading from the holy Gospel according to Mark

Here is that word repent again, this time being spoken by Jesus. It is a call to discipleship: “The kingdom of God is at hand. Repent and believe in the gospel.” Of course, the word gospel means good news. The good news for Israel and for the new disciples, Peter, James, and John is that the kingdom has come in Jesus. He is the fulfillment of the promise for Israel. He has come to call Israel to repentance and a new vision of God’s love in Jesus.

This was a shocking message for most Jews who had seen so many supposed messiahs come and go. They had to have a true change of heart at a time when their people were being persecuted by the Romans, and any new leader would be seen not only as a threat to the Roman Empire but also to Jewish authorities such as King Herod. It was a time that called for courage and an ability to hear a new call from God that built on previous calls from prophets such as Jonah.

If Jesus were on earth today, how would he call our Church to “repent and believe in the Gospel?”