The Dedication of the Lateran Basilica in Rome—God’s Dwelling 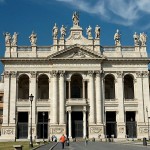 “Since the Passover of the Jews was near, Jesus went up to Jerusalem. He found in the temple area those who sold oxen, sheep, and doves, as well as the money-changers seated there. He made a whip out of cords and drove them all out of the temple area, with the sheep and oxen, and spilled the coins of the money-changers and overturned their tables, and to those who sold doves he said, ‘Take these out of here, and stop making my Father’s house a marketplace.’ His disciples recalled the words of Scripture, Zeal for your house will consume me. At this the Jews answered and said to him, ‘What sign can you show us for doing this?’ Jesus answered and said to them, ‘Destroy this temple and in three days I will raise it up.’ The Jews said, ‘This temple has been under construction for forty-six years, and you will raise it up in three days?’ But he was speaking about the temple of his Body. Therefore, when he was raised from the dead, his disciples remembered that he had said this, and they came to believe the Scripture and the word Jesus had spoken” (John 2:13-22).

The Lateran Basilica was dedicated in the fourth century, housed the bishop of Rome (the pope) for centuries, and is still considered the mother church of all churches. Yet it is sometimes difficult for many Catholics to understand the importance of commemorating the dedication of a church. In much the same way, it was difficult for the people in today’s gospel reading to understand the meaning of Jesus’ words. The Scripture explains that when Jesus spoke of the destruction of the Temple he was speaking of his own body. If Jesus meant himself when he said “Temple,” what do we mean when we say “Church”?

This is a question that has been discussed and debated throughout the history of Christianity. There is a whole discipline, called ecclesiology, dedicated to the question of what “Church” means. This week’s liturgy can help us explore that question. The second reading from the First Letter to the Corinthians says that we are God’s building, and it challenges us to recognize ourselves as the temple of our God. In an opening prayer and in the preface for this feast, the Church is described as a temple of “living stones.”

In today’s gospel reading, the moneychangers have violated the sanctity of the Temple as the house of worship, and Jesus angrily drives them out. To us, the Gospel says we should rid ourselves of the things that prevent us from being what we are intended to be: a dwelling place for the Spirit, a temple of the Lord.

Before the dedication of the Lateran Basilica, Christians met in houses to listen to the Scriptures, to pray together, and to “break bread,” an expression commonly used by early Christian communities. These communities were small, and their members were often persecuted for believing that God dwelt within them.

With this dedication began the possibility of gathering these small Christian communities together to worship their God as one Church of living stones, a Church of which the foundation stone is Christ.

Part of today’s feast is celebrating the freedom to be Christians in public. These readings also call us to the responsibility that comes with that freedom. Do others look at us as living stones? Do we look at ourselves as living stones—as even more a part of the Church than any building could ever be?

Adapted from, Word on the Go, a downloadable resource from RENEW International.