Solemnity of The Most Holy Body and Blood of Christ 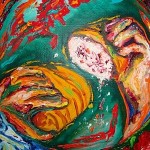 “Jesus said to the Jewish crowds:
‘I am the living bread that came down from heaven;
whoever eats this bread will live forever;
and the bread that I will give
is my flesh for the life of the world.’" (John 6:51-58)

Speaking of the Eucharist, Pope Benedict XVI said, “We ourselves, with our whole being, must be adoration and sacrifice, and by transforming our world, give it back to God. The role of the priesthood is to consecrate the world so that it may become a living host, a liturgy: so that the liturgy may not be something alongside the reality of the world, but that the world itself shall become a living host, a liturgy. This is also the great vision of Teilhard de Chardin: in the end we shall achieve a true cosmic liturgy, where the cosmos becomes a living host. And let us pray the Lord to help us become priests in this sense, to aid in the transformation of the world, in adoration of God, beginning with ourselves. That our lives may speak of God, that our lives may be a true liturgy, an announcement of God, a door through which the distant God may become the present God, and a true giving of ourselves to God.” (Homily, July 24, 2009).

Pierre Teilhard de Chardin was a French paleontologist, geologist, and Jesuit priest who worked extensively in China in the early twentieth century. Initially his scientifically-informed lectures and writings on original sin and the nature of the Eucharist were misunderstood by the Roman Curia, to the point where they were censored. Today we know that to these ideas of Teilhard de Chardin are not heretical; this revised view is not least due to Pope Benedict XVI’s acceptance and appreciation for Teilhard’s thought in these areas, as exemplified above.

It is eye-opening to realize that our actions, but especially our acceptance and love of the Eucharist, as explained by Pope Benedict XVI, allow us to play a part in not only the transformation of ourselves but in giving the universe back to God. Just as it must have been difficult for Pierre Teilhard de Chardin to face rejection upon presenting concepts toward which God had led him, it must have been difficult for Jesus to offer such an amazing life-giving gift only to hear the following directly afterward: "How can this man give us his flesh to eat?" We may have reacted in a similar way; perhaps we still do. Therefore, let us commit to learning more about the Eucharist, but, especially, to spending time in eucharistic adoration so that which we cannot understand mentally is instead illuminated by intimacy—like that which we receive from any special relationship—but which is most readily available in our relationship with Christ.

Matt is a past summer intern for RENEW's Publications and Resources team.