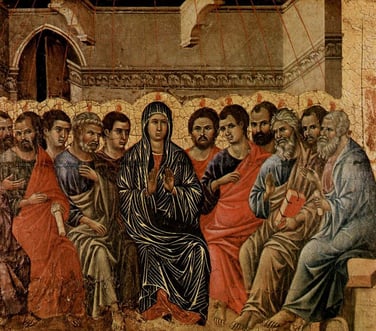 If you wonder why there were so many people from so many countries in Jerusalem at the time described in this reading, it is because Pentecost was first a Jewish feast and a time when pilgrims from all over the near world would come to Jerusalem to worship. Saint Luke tells us of strange happenings: “a noise like a strong wind” and “tongues of fire” similar to events at the time God established the original covenant with the Jewish people. Luke wanted his audience to believe that this was God confirming a new covenant with a new diverse people—thus, the diversity of languages, yet all understanding one another. Of course, Luke is writing all of this a few decades after the actual events, and he wants people to know that this was the beginning of something new that had its roots in a previous tradition and fulfilled that tradition. Today, we say that Pentecost is the birthday of the Church.

"Lord, send out your spirit, and renew the face of the earth." Here is a common thread between Judaism and Christianity—the Spirit of God. The difference for us Christians is that we believe that the Spirit of God is not “out there” somewhere but rather lives in each one of us. That is one of the major breakthroughs of Christianity. God is not some distant being but absolutely close to each of us even when we might not feel that presence. We are never alone.

Saint Paul tells us that we may each have different gifts and forms of service, but what unites us all together is the one Spirit. And, “To each individual the manifestation of the Spirit is given for some benefit.”

You and I each have different gifts from the Spirit. Do you believe that? What are your spiritual gifts? How do you use them, share them? Can you appreciate the gifts of someone else even though you might disagree with that person on one or more issues? That is particularly important today when our country and even our Church are often divided in many ways.

As we read the Acts of the Apostles and the letters of Saint Paul, it becomes clear that there were a series of major differences within the early Church with so many groups coming in and out of focus, each believing that its version of the truth about Jesus was the right one. This has continued for some two thousand years and been the cause of wars and numerous unjust actions. It is only when we listen to the Spirit and act in the loving power of the Spirit that we have peace and true communion.

Jesus says to the Apostles “Peace be with you. … As the Father has sent me, so I send you.” Then, “He breathed on them and said to them, ‘Receive the Holy Spirit. Whose sins you forgive are forgiven them, and whose sins you retain are retained.”

This short few sentences written at the end of the first century, long after the events described, are meant by John to validate the connection between the Church after the resurrection and ascension of Jesus with the powerful words of Jesus during his ministry on earth. Jesus confers gifts starting with the Holy Spirit and then the power to forgive sins. Remember, John is writing his Gospel during a time of persecution, and he wants to make sure that his readers know how blessed they are and how they are strengthened in the midst of endless trials and dangers. The Holy Spirit is with them, just as with us today.