'Hear the Word!' by Bill Ayres: Seventh Sunday of Easter 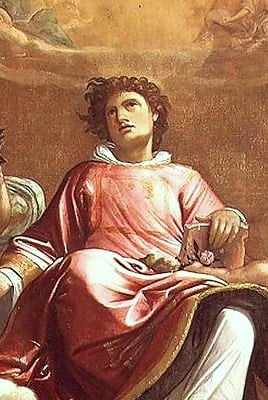 Note: In some dioceses, the liturgy for the Ascension of the Lord is celebrated on this Sunday.

Here we have two stories, one an end and one a beginning. Stephen, “filled with the Holy Spirit,” a deacon, was a powerful preacher and witness to the Gospel and who infuriated the religious leaders, who stoned him to death. Following in the footsteps of Jesus, Stephen forgave his murderers. He is considered the first Christian martyr, a glorious ending.

Saul is an avid Jew who feels called to persecute what he considers to be a dangerous sect of Judaism, the young Christian community. He obviously was held in esteem by the Sanhedrin, and the witnesses who testified against Stephen “laid down their cloaks at the feet of a young man named Saul” as they were stoning Stephen. This is a shocking story about the man, known to us as Paul, who was most instrumental in the growth of the early Church. He had a deep fear and hatred for all that Stephen proclaimed. Yet, after his dramatic conversion, he became the most important and courageous apostle who is more responsible than anyone for spreading the message of Christ. That is the power of the Holy Spirit at work in the Church, the same Spirit that abides in each of us today and in our Church with all its problems and weaknesses.

“The Lord is king, the most high over all the earth.” The psalmist lived in a time of kings. We do not, but his intention is the same as ours, to honor the power of God in our midst.

“Come Lord Jesus.” These are the last words of the Book of Revelation and Revelation is the last book of the Bible. Those words were written at a time of persecution and great distress to give hope to a struggling people. “Come Lord Jesus. Come Lord Jesus.” Could these words be part of our prayer when we experience crises, disappointments, and fears for the safety of our loved ones or our own safety and health; when we see pictures and hear stories of the millions of refugees and victims of war and persecution? We may feel helpless in the face of such daunting personal or global tragedy. Let us pray, “Come Lord Jesus.”

John wrote his Gospel long after the death of and resurrection of Jesus, and it includes not only the basic story that the other Gospels tell but also John’s accounts that are somewhat different from what the other evangelists recorded. This passage has a powerful theme: “so that they may all be one, as you Father, are in me and I in you, that they may also be in us.” The dual message here is that Jesus and the Father are one and that we are one with them. That is the basis of our faith. We do not believe in an isolated being up in the sky, as it were, but in a Trinity, a community of persons—the Father, Son, and Holy Spirit—and the best part is that we, in a way, are part of that community. God is our Father, too. Jesus is our brother, and the Holy Spirit lives within us. That is quite a community in which to share!