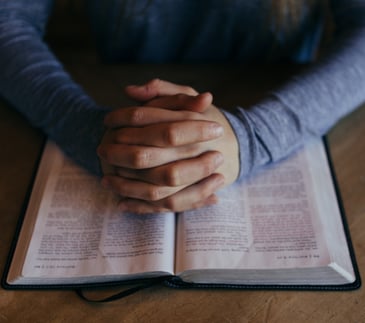 A reading from the Book of Genesis

Imagine making a deal with God, bargaining with God over the fate of thousands of people. That is the scene here with Abraham asking God to spare the wicked cities of Sodom and Gomorrah. It is like a scene from a Middle Eastern marketplace, except this one has the fate of two cities in the bargain. The authors of Genesis use this story because they know it will resonate with their audience.

“In those days, the Lord said: ‘The outcry against Sodom and Gomorrah is so great, and their sin so grave that I must go down and see whether or not their actions fully correspond to the cry against them that comes to me. I mean to find out.” Standing in the divine Presence, Abraham sees an opening and asks, “Will you sweep away the innocent with the guilty? Suppose there were fifty innocent people in the city; would you wipe out the place, rather than spare it for the sake of the fifty innocent people within it? Far be it from you to do such a thing to make the innocent die with the guilty so that the innocent and the guilty would be treated alike!’” God then says that he would spare the city for the sake of the innocent people, and the bargaining begins! Abraham keeps on lowering the bar to forty five, then forty, thirty, twenty, and finally ten. God then relents: “For the sake of those ten, I will not destroy it.”

This may seem like a strange story about an all-loving and forgiving God, but remember, this was written at a time when most people believed in pagan gods that were unloving, violent, and untrustworthy. Abraham was the first of a whole new order, a new relationship with a God who was just and always on the side of his people. We Christians come from that tradition, which was fulfilled in the long-awaited Messiah, Jesus Christ.

“O Lord, on the day I called for help, you answered me.” That’s the refrain, from verse 3; we also read in Psalm 138, “When I called, you answered me.” But there is no timetable. Prayer is not like putting your card in the machine, and out comes money. Even if we know that, we can be disappointed when it seems there is no answer, or at least not the one we want and when we want it. We need, then, to pray for discernment and patience.

“Brothers and sisters: You were buried with him in baptism, in which you were also raised with him through faith in the power of God, who raised him from the dead.” Paul wants all the converts to Christianity to know that in baptism they died with Christ and were raised with him. There was no need for them to be circumcised. “And even when you were dead in transgressions and the uncircumcision of your flesh, he brought you to life along with him, having forgiven us all of our transgressions.”

There was a major controversy in the early Church about whether gentiles who wanted to be baptized needed to be circumcised. Paul spoke out many times against this obligation and eventually won the battle, thus opening the Church to thousands and soon millions of new converts.

For Paul, baptism was the first step in finding a new life, a new community, and the presence of the Holy Spirit who comes to all in baptism. That is so important for us to remember—that the very Spirit of God dwells in each of us, even if and when we may have our doubts and major failings.

A disciple said to Jesus, “‘Lord, teach us how to pray.’” He said to them, ‘When you pray, say: Father, hallowed be your name, your Kingdom come. Give us each day our daily bread and forgive us our sins for we ourselves forgive everyone in debt to us, and do not subject us to the final test.’”

Then Jesus told a parable about a man who knocked on the door of his neighbor at midnight to ask for food for a friend who had just arrived hungry. The sleepy neighbor replied, “Do not bother me; the door has already been locked and my children and I are already in bed. I cannot get up to give you anything.” Jesus then said, “I tell you, if he does not get up to give the visitor the loaves because of their friendship, he will get up to give him whatever he needs because of his persistence. And I tell you, ask and you will receive; seek and you will find; knock and the door will be opened to you.”

The point Jesus is making with this short parable is that we need to be persistent in prayer. It may be that we ask God to grant us a request, an important and appropriate request, but nothing seems to happen. Persistence! The answer may come to us slowly, or it may not be the answer we are hoping for, but we should persist and trust in a God who is not far away, but who lives within us.

Photograph by Patrick Fore on Unsplasn.