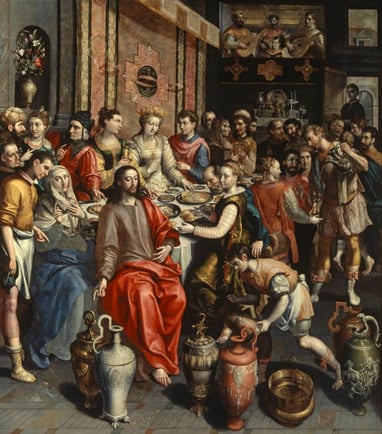 The Babylonian Exile took place from 597 B.C. to 538 B.C. and was a horrific experience for the Jewish people. This reading is from the last part of the Book of Isaiah and was written as the Jewish people returned from captivity.

The author wants to celebrate the return and let it be known that it happened by the power of God. “No more shall people call you ‘Forsaken,’ or your land ‘Desolate,’ but you shall be called ‘My Delight,’ and your land ‘Espoused.’ For the Lord delights in you and makes your land his spouse.”

That may be strange language for us, but it was a powerful, joyful truth for the Jewish people after so many years of suffering in a foreign land.

“Proclaim the marvelous deeds to all the nations.” Our God continues to give us “marvelous deeds.” Are you aware of any in your life?

Are you ever aware that the very Spirit of God dwells within you and that you have been given gifts from the Spirit? What are your spiritual gifts? Kindness, leadership, wisdom, truthfulness, compassion, strength, friendship, healing?

Acknowledging your Spirit-given gifts is not to have false pride but rather to be thankful for those gifts and share them joyfully.

This story about Jesus and his mother, Mary, was recorded by John, who was not only an apostle but a second son to Mary after the death of Jesus. John ends the story of the water turned to wine by writing, “Jesus did this at the beginning of his signs at Cana in Galilee and so revealed his glory, and his disciples began to believe in him.”

Notice the order of importance in the story. “There was a wedding at Cana in Galilee and the mother of Jesus was there. Jesus and his disciples were also invited to the wedding.” It seems that Mary was the one who knew the family well enough to be invited.

Then a problem arose, and Mary is the one who took charge. “When the wine ran short, the mother of Jesus said to him, ‘They have no wine.’ And Jesus said to her ‘Woman, how does your concern affect me? My hour has not yet come.” That did not deter Mary. “His mother said to the servants, ‘Do whatever he tells you.’”

Jesus told them, “Fill the jars with water.” The servants did as they were told, and when they brought some of that water to the headwaiter, it had become wine. In fact, the headwaiter told the bridegroom, “You have kept the good wine until now.”

But the last line of the story is most important. “Jesus did this at the beginning of his signs at Cana in Galilee and so revealed his glory, and his disciples began to believe in him.” This was just the beginning of the Lord’s ministry, and John wanted us to know that Mary was the one who got it all started.