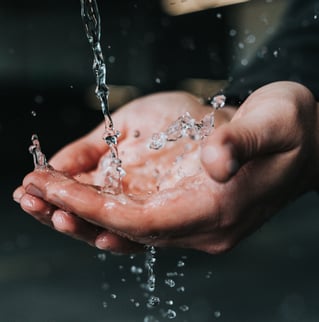 In the 1997 movie As Good As It Gets, Jack Nicholson plays Marvin Udall, author of more than sixty romance novels. Udall lives alone in an upscale New York City apartment where he writes love stories.

He also washes his hands again and again during the day, each time peeling the shrink wrap off of one bar of antiseptic soap after another, passing each one across his hand only once and then throwing it out, because it has been contaminated. And he rinses his hands in water that is as hot as he can stand.

When he ventures outside of his apartment onto the busy Manhattan streets, he uses all kinds of maneuvers to make sure that he doesn’t come in contact with the other pedestrians.

So, from that point of view, Marvin Udall is clean, but there are other aspects to his personality. He is not interested in anything or anyone that does not serve his needs. He is rude. He is insulting. He is openly abusive of people he doesn’t approve of, such as homosexuals and Jews.

If Jesus had known about Marvin Udall—clean on the outside, on the inside not so much—he might have used him as the subject of a parable to answer the critics we read about in the synoptic gospels­—asking why Jesus’ disciples or, according to Luke, Jesus himself did not follow the Jewish practice of washing their hands before eating.

In these episodes, Jesus didn’t argue against good hygiene, but he made the point that a person should take care of the interior life, or else care of the exterior life is not only pointless but hypocritical.

The people criticizing Jesus and his disciples were distorting the principle described in the book of Deuteronomy in which God, speaking through Moses, tells the Israelites, “you shall not add to what I command you nor subtract from it.”

Moses said this by way of introducing the Law of God he was about to pass on to the people—the law we know as the Ten Commandments, which is really the natural law that is engraved in our hearts so that we know the difference between right and wrong, whether or not we put it into practice.

Anyway, religious authorities between the time of Moses and the time of Jesus hadn’t done much subtracting from what God had commanded, but they had done a lot of adding, so that there were more than six hundred individual regulations—including the business about washing hands—that a faithful Jew was supposed to observe.

The purpose of these rituals was to keep a person focused on his duty to live according to the will of God, and in that sense the rituals were well intended.

But a Jew could observe all of them—just as a priest can celebrate a flawless liturgy and a deacon can preach the perfect homily and a layman can attend Mass every day of his life—without fulfilling the law engraved in his heart.

The Ten Commandments mentions specific offenses against the will of God—idolatry, murder, stealing, adultery, lying—and religious and moral leaders have inferred many more, including usury, bribery, any form of violence, and neglect of those living in poverty.

Photo by Nathan Dumlao on Unsplash