'Hear the Word!' by Bill Ayres: Palm Sunday of the Lord's Passion 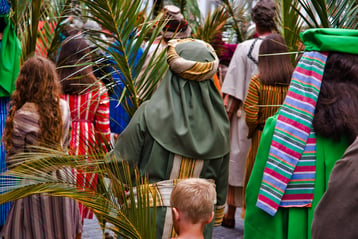 Isaiah tells of a Suffering Servant. “The Lord God has given me a well- trained tongue, that I may know how to speak to the weary a word that may arouse them. Morning after morning he opens my ear that I may hear; and I have not rebelled, have not turned back. . . . The Lord God is my help, therefore I am not disgraced.” Throughout history, Jesus has been seen as the Suffering Servant Isaiah envisioned, the one who came not to be served but to serve, the one who came to die for us.

A reading from St. Paul's Letter to the Philippians

“Christ Jesus, though he was in the form of God, did not regard equality with God something to be grasped. Rather he emptied himself, taking the form of a slave, coming in human likeness; and found human in appearance, he humbled himself, becoming obedient to the point of death, even death on a cross.”

This is a remarkable passage from St. Paul who, like all the followers of Jesus, was trying to make sense of who Jesus was. He put together the two parts of the mystery, the human and divine dimensions of Jesus. It is the mystery of our faith: Jesus was not only a prophet and a healer, but also the Son of God who shared the divine life. Paul “got it” and gave his life for it. In this letter, he shares the mystery with his contemporaries and with us.

The Passion of our Lord Jesus Christ according to Luke

At the beginning of this long reading, Luke recounts the story of Jesus sharing a Passover meal with the apostles. “When the hour came, Jesus took his place at table with the apostles. He said to them, ‘I have eagerly desired to eat this Passover with you before I suffer, for I tell you, I shall not eat it again until there is fulfillment in the kingdom of God.’ Then he took a cup, gave thanks, and said, ‘Take this and share it among yourselves; for I tell you from this time on I shall not drink of the fruit of the vine until the kingdom of God comes.’ Then he took the bread, said the blessing, broke it, and gave it to them, saying, ‘This is cup is the new covenant in my blood, which shall be said for you.’”

This is the beginning of our Eucharist, the one we share today and at every Mass. Yes! It comes from Jesus himself, and for two thousand years people have gathered to celebrate the presence of Jesus in our midst and in our very bodies. The Eucharist binds us to Jesus and to one another every time we celebrate in his name.

There is so much more in today’s Gospel. Please listen carefully and read it again. Each time, you will be rewarded with new insights and a growing closeness with Jesus. It is the story of our faith living in us now.

Photograph by Brady Leavell on Unsplash