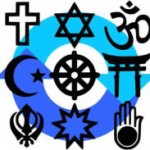 A few days after he was elected, Pope Francis made an unusual gesture during a meeting with several thousand journalists who had assembled in Rome to cover the conclave.

After complimenting the journalists on their work, talking to them about the centrality of Christ in the Church, and telling them how he had chosen his name, the pope closed with these words:

“Since many of you are not members of the Catholic Church, and others are not believers, I cordially give this blessing silently, to each of you, respecting the conscience of each, but in the knowledge that each of you is a child of God.’’

Although he didn’t say so, Francis was speaking to the journalists in the spirit of the Second Vatican Council, which the Church commemorates this year.

The manner in which he blessed the journalists evoked one of the best-known documents issued by the council: the Declaration on the Relation of the Church to Non-Christian Religions, usually referred to by the first two words of the Latin text, Nostra aetate —that is, “in our age.”

The document notes that in a world that is shrinking – in terms of better communications and travel and massive immigration – the need for the Church to understand what people have in common has become more urgent than ever.

For example, the document says, people of all backgrounds pursue the answers to certain questions: “What is man? What is the meaning, the aim of our life? What is moral good, what is sin? Whence suffering and what purpose does it serve? Which is the road to true happiness? What are death, judgment and retribution after death? What, finally, is that ultimate inexpressible mystery which encompasses our existence: whence do we come, and where are we going?’’

After discussing in very broad terms how Hinduism and Buddhism approach such questions, the document goes on:

“The Catholic Church rejects nothing that is true and holy in these religions. She regards with sincere reverence those ways of conduct and of life, those precepts and teachings which, though differing in many aspects from the ones she holds and sets forth, nonetheless often reflect a ray of that Truth which enlightens all men. Indeed, she proclaims, and ever must proclaim Christ ‘the way, the truth, and the life’ (John 14:6), in whom men may find the fullness of religious life, in whom God has reconciled all things to Himself. ’’

The document also acknowledges the Muslims’ belief in the one God; their desire to submit to his will; their regard for Jesus — as a prophet — and for Mary; and their commitment to prayer, fasting, and charity.

Nostra aetate is especially emphatic in pointing out the bond between the Catholic Church and Judaism, rooted in the patriarch Abraham and God’s covenant with Israel.

The document says that the Church “decries hatred, persecutions, displays of anti-Semitism, directed against Jews at any time and by anyone,’’ and more broadly “reproves, as foreign to the mind of Christ, any discrimination against men or harassment of them because of their race, color, condition of life, or religion.”

Nostra aetate has at times been misunderstood or misrepresented as suggesting that all religions are equally valid, but the document itself contradicts that when it says that the Church must ever proclaim Christ as “the way, the truth, and the life.’’

Instead, the document calls for respect for humanity’s common pursuit of truth and respect for the consciences of individual men and women.

The document encourages an attitude that was demonstrated by Jesus himself, who responded to the needs of the centurion and the Phoenician woman without deriding their religious beliefs.

Pope Francis did refer to Nostrae aetate in an audience with representatives of other Christian churches and non-Christian religions and perhaps even broadened its message when he said:

“(W)e . . . sense our closeness to all those men and women who, although not identifying themselves as followers of any religious tradition, are nonetheless searching for truth, goodness and beauty, the truth, goodness and beauty of God. They are our valued allies in the commitment to defending human dignity, in building a peaceful coexistence between peoples, and in safeguarding and caring for creation.’’