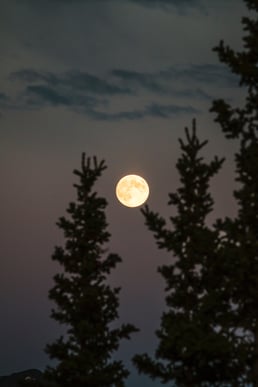 So, like a lot of other people, we have to watch Moonstruck every six months or so.

Someone asked me, how can you watch the same movie over and over again? I said, because every time I watch it, I notice things that I didn’t see before. This time, for instance, I noticed that, in that movie, there are several messages for Ash Wednesday and Lent.

One of those messages is in a remark that Rose Castorini makes to her husband:

“Cosmo … I just want you to know that, no matter what you do, you’re going to die, just like everybody else.”

To which he replies, “Thank you, Rose.”

And, of course, that’s what the ashes remind us of today. The liturgy provides two formulas for the minister to use when applying the ashes. The one used most often these days is, “Repent, and believe in the Gospel,” but the old classic that is still used in some places confirms Rose Castorini’s statement: “Remember that you are dust, and to dust you shall return” — you’re going to die, just like everybody else.

That may seem like a morbid sentiment, but it isn’t meant to be. Quite the opposite. It isn’t meant to plunge us into depression because, sooner or later our lives are going to end, but rather to encourage us to make the most of every day of the life we have.

Those aspects of our faith—dust to dust, Ash Wednesday, the whole season of Lent—are meant to deliver the message that a priest delivers to Rose’s daughter, Loretta Castorini, when she tells in him in confession that she had an affair with her fiancé’s brother:

“Loretta, reflect on your life!”

He doesn’t tell her to reflect on her death, but on her life.

And that’s the purpose of the season we’re embarking on tonight—to spend time, not casually but intentionally asking our selves how we spend the time we have, what preoccupies us, how we treat other people, what we contribute to the general welfare, when and how and for what do we pray.

So Lent is not about death, but rather about renewal of the life we have, no matter how long that’s going to last.

Lent, after all, is not a destination, not an end in itself. The only reason we have the season of Lent at all is because we have, first, Good Friday and then Easter Sunday.

The only reason we have Lent is because the passion, death, and resurrection of Jesus has gained for us the promise of redemption—meaning that no matter what mistakes we make, whether the things we do or the things we fail to do, we can always start again.

There is a scene in Moonstruck  in which Loretta is shocked to hear that her prospective mother-in-law, who was near death in Palermo, has completely recovered.

Rose says, “It was a miracle.” Loretta says, “A miracle? These are modern times. There ain’t supposed to be miracles any more,” and Rose says, “I guess it ain’t modern times in Sicily.”

The Church, occasionally, when she is investigating the cause for sainthood of some man or woman, declares that miracles have, indeed, occurred in modern times.

But what’s more important for each of us is the miracle that occurred for all time, the Easter miracle that opens for us the way to life forever in the presence of God. Even as we are marked with the ashes that remind us of our mortality, we know Easter is coming.

Lent will not be a time for brooding over the fact that some day we’ll die, but rather a time for preparing ourselves to live with God.

Well, Rose Castorini has a casual dinner with a man she doesn’t know, and when he walks her home he asks if she can invite him in.

No, she says, “I can’t invite you in because I’m married, and because I know who I am.”

That’s what the next few weeks are about for each of us, to look honestly at our lives, celebrate the things that have made us close to God, and work on the things that do not, knowing that the Easter miracle awaits us, even in these modern times.

Photo by Steve Halama on Upsplash

Charles Paolino is managing editor at RENEW and a permanent deacon of the Diocese of Metuchen.