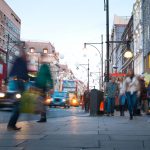 The Mission Co-op preacher in our parish this year was a Maryknoll priest who said that Africa, where he worked for many years, is no longer “mission territory.”

And from what I’ve heard from that priest and others familiar with the Church in Africa, this phenomenon isn’t just in the census.

Masses in Africa are packed, I am told, and they are joyous occasions, marked by song and dance and fellowship, and folks aren’t looking at their watches or making for the door right after Communion. In fact, a missionary sister who spoke to an adult group at my parish last year said churchgoers in Africa feel shortchanged if the homilist doesn’t speak for half an hour.

There is a parallel boom in religious vocations in Africa. The Bigard Memorial Seminary in Nigeria, with more than a thousand students, is said to be the largest in the world.

That’s all good news, but it doesn’t mean that the concept of “mission territory” is no longer relevant.

Pope Francis has been telling us for the past four years not only that there still is mission territory—namely our own immediate surroundings—but also that we are the missionaries.

He doesn’t mean that we are called upon to convert non-Christians to the faith as though we were Junípero Serra in the Baja.

The Pope has inspired some debate by saying that this missionary discipleship does not mean proselytizing—that is, directly trying to convert someone from one religion to another.

Some Catholics have objected that such an approach can lead to the idea that religious truth is a matter of personal choice.

But Francis has explained that the Church is more likely to grow and become more vibrant and effective by making itself attractive than by arguing doctrine.

In other words, if I read the Holy Father correctly, the Church’s future lies in helping people, including disaffected and lukewarm Catholics, see beyond superficial appearances and outmoded or simply false impressions.

The pope himself gives a perfect example of this. He doesn’t compromise on the dogmatic teachings of the Church, but because of his public image—and especially the joy he finds in his faith, and the magnanimity with which he greets people of all faiths or no faith—far more people than ever in recent history are paying attention to what the leader of the Catholic Church says on issues of mutual respect, social justice, political integrity, and moral responsibility.

When he named his famed apostolic exhortation “The Joy of the Gospel,” it wasn’t a casual decision.

The whole world witnesses the joy that this man finds in his religious faith, and the world takes notice.

When he asks us to be missionary disciples, he is asking us to let others see the joy that fills us because of our encounter with Jesus Christ, to gently tell our faith stories whenever opportunities arise, and so to present the Church as a caring and inviting home.

This post was originally published in The Catholic Spirit, the newspaper of the Diocese of Metuchen. Charles Paolino is a permanent deacon of that diocese and managing editor at RENEW International.