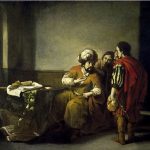 A reading from the Book of the Sirach
(Chapter 27:30-28:7)
“Forgive your neighbor’s injustices; then when you pray, your own sins will be forgiven. Could anyone nourish anger against another and expect healing from the Lord? Could anyone refuse mercy to another like himself, can he seek pardon for his own sins? If one who is but flesh cherishes wrath, who will forgive his sins? Remember your last days and put enmity aside, remember death and decay, and cease from sin! Think of the commandments, hate not your neighbor; remember the Most High’s covenant, and overlook faults.”

Please read that again and let it sink in.

It is so easy to focus on minor injustices done to us, a seeming neglect or inappropriate words. Wonderful relationships can be ruined, families torn apart. Why? Cannot justice and love be restored through patience and forgiveness? These are the same gifts we ask from God for ourselves. Without them, we are at a loss and isolated. With them, we are renewed and enlivened.

“The Lord is kind and merciful, slow to anger, and rich in compassion.” Is that the God you believe in? I hope so. It is the only God that exists.

A reading from the Letter of Saint Paul to the Romans
(Chapter 14:7-9)

“Brothers and sisters: None of us lives for himself, and no one dies for himself. For if we live, we live for the Lord, if we die we die for the Lord; so then, whether we live or die, we are the Lord’s. For this is why Christ died and came to life, that he might be the Lord of the dead and of the living.”

Let’s think about that for a moment. Jesus is with us throughout our lives, every day of our lives and at the time of our deaths—especially then. Have you ever had the opportunity and privilege to be with someone who is dying? It is a sad time, a challenging time, but also a blessed time with Jesus and our loved one. It is a time when gifts are given. We can call forth those gifts for the dying person, and they will come to us as well in faith.

A reading from the holy Gospel according to Matthew
(Chapter 18:21-35)

“Peter approached Jesus and asked him, ‘Lord, if my brother sins against me, how often must I forgive? As many as seven times?’ Jesus answered, ‘I say to you, not seven times but seventy seven times.’” Peter would know what Jesus meant. Seven was a powerful number in Jewish culture, and seven times seven would be heard to mean as many as needed.

Other servants saw what had happened and told their master. “His master summoned him and said to him, ‘You wicked servant! I forgave you your entire debt because you begged me to. Should you not have had pity on your fellow servant, as I had pity on you?’ Then in anger his master handed him over to the torturers until he should pay back the whole debt. So will my heavenly Father do to you, unless each of you forgives your brother from your heart.”
Jesus is using language and an example from his time, not ours, but the point is the same. We must forgive others if we want to ask God for forgiveness. Yes. Sometimes that is very hard, but it is what we are called to do.

Is there someone that you need to forgive? Ask the Holy Spirit who lives within you for the strength to forgive on whatever level you are able. Does it mean that you have to be best friends with the person? Sometimes it works out that way, but that is not always possible. What is possible for you? How can you take the first step or help a person you know to take that step toward reconciliation?