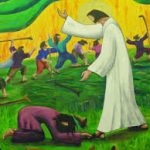 In ancient times, lepers were considered unclean. They were avoided and were almost never in positions of power. Naaman was a leper but also was a commander in the army of the king of Aram. The king had such high regard for Naaman that he told him to ask the prophet Elisha to cure the leprosy. Elisha told Naaman to plunge into the Jordan River seven times. At first, Naaman refused, but his servants talked him into it, and he was cured of leprosy. He then told Elisha, “Now I know that there is no God in all the earth except in Israel. Please accept a gift from your servant.” But Elisha would not accept the gift. So, Naaman said, “If you will not accept, please let me, your servant, have two mule-loads of earth, for I will no longer offer holocaust or sacrifice to any other God except to the Lord.”

This was a big deal. A high-ranking pagan had converted to the God of Israel, and he asked for a bit of Israel (“two mule-loads of earth”) to take with him so that he could worship in Israel no matter where he is. The author wants his readers to know that even a powerful pagan army commander came to believe because of the power of the true God.

“The Lord has revealed to the nations his saving power.” Throughout the Hebrew Scriptures, we read that God did reveal his saving power over and over. Have you ever asked yourself how God has gifted you in all sorts of ways? Perhaps it was a surprise gift in the form of a new and important love in your life or a healing for you or someone you love. Or perhaps it is the all-abiding presence of the Holy Spirit in your life every day.

A reading from second Letter of Saint Paul to Timothy
(Chapter 2:8-13)

Paul is in prison once again, but this time it is very serious. “I am suffering, even to the point of chains, like a criminal. But the word of God is not chained. Therefore, I bear with everything for the sake of those who are chosen, so that they too may obtain the salvation that is in Christ Jesus, together with eternal glory. … If we have died with him we shall also live with him; If we persevere we shall also reign with him.”

We’re thankful that none of us suffers for our faith in the way that Paul did, but there are times when we do experience intense suffering. When has that kind of deep suffering hit you, surrounded you, gotten inside you? How did you get through it? Are you still going through it? Maybe a certain cause of suffering has passed, only to be replaced by a newer and more intense form of pain. Have you asked for help from someone close to you or a counselor or therapist? Maybe there is someone who can help ease your suffering even if that person can’t take it away entirely. Or, maybe you can learn to live with it and go on with the more loving and positive aspects of your life. Often, we can become overwhelmed by one painful part of life and lose sight of all the gifts we continue to receive amid the suffering. A suffering time might be a good time to recall the gifts you continue to experience and the times in your life when God did help you through your pain.

A reading from the holy Gospel according to Luke
(Chapter 17:11-19)

In the first reading, we heard about a leper being healed. Here, we have ten lepers. “They stood at a distance from him and raised their voices, saying, ‘Jesus, Master! Have pity on us!’ And when he saw them, he said ‘Go show yourselves to the priests.’ As they were going they were cleansed. And one of them, realizing he had been healed, returned, glorifying God with a loud voice; and he fell at the feet of Jesus and thanked him. He was a Samaritan. Jesus said in reply, ‘Ten were cleansed, were they not? Where are the other nine? Has none but this foreigner returned to give thanks to God?’ Then he said to him, ‘Stand up and go; your faith has saved you.”

Jesus was a healer. Even scholars who do not believe he was the Son of God agree, and there are examples of Jesus healing many people and sometimes only one. This time, he tells the lepers to “show yourselves to the priests.” But it is not the priests who heal them. “As they were going they were cleansed.” Jesus was the one who healed all ten, but only one, a Samaritan, came back to thank him. Jesus asks, “Where are the other nine? Has none but this foreigner returned to give thanks to God?” So now, Jesus takes the healing one step further. “Stand up and go; your faith has saved you.” The man who had been considered a heretic because he was a Samaritan is not only healed but he is saved for all eternity.

You and I may ask Jesus for healing at many times in our lives, but he gives us much more, the gift of eternal life.