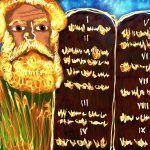 A reading from the Book of Deuteronomy
(Chapter 31:7-9)

That is the basis of Judaism, monotheism, loving one God. The Jews were the first and for centuries the only people to worship one God. What an amazing breakthrough! They were hated and killed for their faith way back then and for centuries thereafter, including in the Holocaust of the last century, and they are persecuted today—even in our own country. Let us pray for and give thanks for our Jewish brethren for their faith amidst persecution.

“Fear the Lord your God, and keep, throughout the days of your lives, all his statutes and commandments which I enjoin on you, and thus have a long life.” This was the promise of Moses to his people. It was based on keeping the Law which eventually went way beyond the Ten Commandments to include more than 600 laws and dietary restrictions.

Jesus challenged that approach, knowing that the laws were like a millstone around the necks of the people instead of an instrument of their liberation. He was criticized and condemned for actually breaking the law in order to heal people on the Sabbath.
For us Christians, salvation that is more than “a long life” that Moses promised but rather eternal life that comes from faith in Jesus. As Saint Paul tells us, we are saved through faith in Jesus, not through the Law.

“I love you O Lord, my strength.” Do you believe that your true and enduring strength comes from the Lord? How have you experienced that strength? Do you sometimes doubt it? Let us be thankful for all the times when God has strengthened us.

The high priest was a very important figure in the Jewish religion. The author wanted his audience, who were mostly Jewish Christians, to know that Jesus was the one high priest. “Brothers and sisters, The Levitical priests were many because they were prevented by death from remaining in office, but Jesus, because he remains forever, has a priesthood that does not pass away. … He has no need, as did the high priests, to offer sacrifice day after day, first for his own sins and then for those of the people; he did that once for all when he offered himself.”

This is a radical statement because it gets to the root of Christianity. Salvation comes from Jesus, not from the high priest offering sacrifices every day. The Eucharist—Jesus sacrificing himself again on the altar—brings his very presence to us in the forms of bread and wine.

“One of the scribes came to Jesus and asked him, ‘Which is the first of all the commandments?’ Jesus replied, ‘The first is this. Hear O Israel! The Lord our God is Lord alone! You shall love the Lord your God with all your heart, with all your soul, with all your mind, and with all your strength. The second is this: You shall love your neighbor as yourself.’ The scribe said to him ‘Well said, teacher.’ Then Jesus said to him, “You are not far from the kingdom of God.’ And no one dared to ask him any questions.”

That’s it! Love God and love your neighbor as yourself—two seemingly simple commandments. Yet, they are endlessly challenging. What does it really mean to love God and your neighbor? And—the age-old question that Jesus was asked two thousand years ago—who is my neighbor? It is certainly not only the folks next door. Is it only the people we work with, play with, worship with, and do business with? Is it only those who think as we do, believe as we do, vote as we do, and have the same nationality or color as we do? Or is our neighbor the man in the story Jesus told about the Good Samaritan when someone asked that question? That was a man who Jews thought of as an enemy, a heretic, and yet he was the person who saved the life of the man who had been attacked by robbers. His own people passed him by but then the “enemy,” the infidel was the true neighbor.