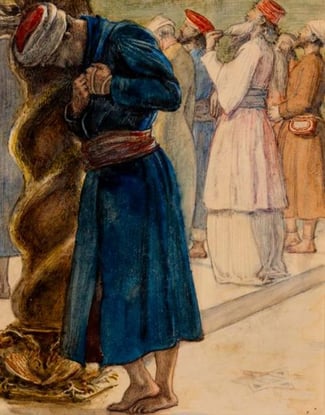 Sirach is saying two things at the same time: “The Lord is a God of justice, who knows no favorites” and “Though not unduly partial to the weak, yet he hears the cry of the oppressed. The Lord is not deaf to the wail of the orphan, nor to the widow when she pours out her complaint.”

Widows and orphans were special people In Israel because of their lack of power and money. In our society, not all widows and orphans are impoverished, but many are. We need to support policies that help them in several ways, including financially, and if we know people who are impoverished widows or orphans or anyone else, let us reach out to them with a helping hand.

“The Lord hears the cry of the poor.” We need to be part of the Lord’s answer when we are able.

A reading from the Second Letter of Saint Paul to Timothy

Paul was quite a character. We know that he started out as a persecutor of Christians and then, after his dramatic conversion experience, he never looked back. He spent the rest of his life traveling all over Israel and well beyond in what we now know as the Near East, Asia Minor, and Europe. He converted thousands of people, Jews, and gentiles, in town after town. In later life, he was beaten, imprisoned, and eventually murdered. Throughout all the suffering and betrayals, he never gave up. Because of him, the new faith flourished and grew throughout the world of his time and beyond for two thousand years.

“Jesus addressed this parable to those who were convinced of their own righteousness and despised everyone else.” In this parable, there are two main characters, a tax collector who was despised because he represented the Roman oppressors and often cheated his own people, and a Pharisee who was part of a respected class. The Pharisee boasts in prayer that he fasts twice a week and pays tithes on his whole income—what was required by Jewish law and more. The tax collector’s prayer is very different: “He beat his breast and prayed, ‘O God, be merciful to me a sinner.”

Jesus says that the tax collector “went home justified, for whoever exalts himself will be humbled, and the one who humbles himself will be exalted.” Jesus was looking beyond people who obeyed the letter of the law to people with humble and generous hearts—people who do all they can to build a world of charity and justice, not because it’s required of them or makes them look good in the eyes of others, but rather because they put the wellbeing of others before their own. Jesus still looks for such people today.

Topics: parable of the tax collector and the Pharisee, 20th Sunday in Ordinary Time