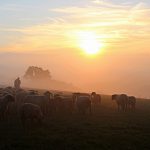 A reading from the Book of the Prophet Jeremiah
(Chapter 23:1-6)

Jeremiah was one of the most courageous and tortured of all the prophets. Today’s reading from his prophecy was composed in the context of the battle for power between the Babylonians and the Egyptians with Judea, and specifically Jerusalem, in the middle. The Jewish king Zedekiah was torn between the two enemies and was weak. Jeremiah has a message from God for the king and the people. “Woe to the shepherds who mislead and scatter the flock of my pasture. … You have scattered my sheep and driven them away. … I myself will gather the remnant of my flock from all the lands to which I have driven them and bring them back to their meadow; … Behold, the days are coming, says the Lord, when I will raise up a righteous shoot to David; as king he shall reign and govern wisely, he shall do what is right and just in the land. In his days Judah will be saved.”

Over the centuries Israel had many kings—some good, such as David, the best, and many others weak and dishonest, such as Zedekiah, who was responsible for the horrible Babylonian Exile and the destruction of Jerusalem. Jeremiah has God promising to send a new king in the quality of the great king David. Of course, the Gospels tell us that Jesus came from the line of David, so his disciples saw him as that righteous shepherd.

“The Lord is my shepherd; there is nothing I shall want.” This is the most quoted and prayed line in all the Psalms, even though shepherds are not a part of our daily lives or thinking. That’s because, for us, Jesus is the shepherd. He is always with us and takes care of us. Do you believe that? How have you experienced the care of Jesus?

A reading from the Letter of Saint Paul to the Ephesians
(Chapter 2:13-18)

This letter has some of the deepest and most meaningful messages for our faith. Here, Paul wants to bridge the gap between Jews and Gentiles.

“In Christ Jesus you who once were far off have become near by the blood of Christ. For he is our peace, he who made both one and broke down the dividing wall of enmity, through his flesh, abolishing the law with its commandments and legal claims, that he might create one new person in place of the two, thus establishing peace. … He came and preached peace to you who were far off and peace to those who were near, for through him we both have access in one spirit to the Father.”

Paul was a devout Jew who loved his people and saw that their salvation was right there in Jesus. He also became friends with many Gentiles, and he saw that they, too, are called to follow Jesus: “Through him we both have access in one Spirit to the Father.” Paul spent his life trying to bring these two peoples together. Sometimes he succeeded, but more often he did not. It was a source of great suffering for him, but it never deterred him from his mission.

Sometimes, we, too, succeed in what is most important to us, and sometimes we seem to fail. But there is always another day, another chance, if we remember that we, too, are called to bring peace and love to all people, starting with those closest to us.

A reading from the holy Gospel according to Mark
(Chapter 6:30-34)

Here we have the theme of Jesus as the Good Shepherd following from the two previous readings. The apostles have been out proclaiming the good news, teaching, and doing good deeds for the people. Jesus tells them, “’Come away by yourselves to a deserted place and rest for a while.’ …People were coming and going in great numbers, and they had no opportunity even to eat. So they went off in the boat by themselves to a deserted place.” Jesus is being the Good Shepherd to his apostles, telling them to take a break, have a meal, share stories from the road. But it doesn’t work. “People saw them leaving and many came to know about it. They hastened there on foot from all the towns and arrived at the place before them.”

Now, we see Jesus as the Good Shepherd for all the people. “When he disembarked and saw the vast crowd, his heart was moved with pity for them, for they were like sheep without a shepherd, and he began to teach them many things.” This notion of Jesus being the Good Shepherd is somewhat foreign to us who have never met a shepherd, but it was a powerful image for people of his time. It meant safety, caring, nurturing, and fidelity to the task of protecting. Those are things we can relate to in our lives. Jesus is our Protector.