"Hear the Word!" by Bill Ayres: Second Sunday of Lent 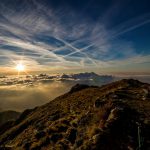 This is the story of God making a covenant with Abram who from then on was known as Abraham. He had a new identity and a new role as the leader of his people. All of this came about through the power of God who told Abraham, “To your descendants I give this land.” This covenant binds the Jewish people to God forever.

“The Lord is my light and my salvation. Whom should I fear?” The word fear that is used here means that we have an awesome respect not a cringing, terrifying relationship with God. Many Christians have been misled into thinking that their relationship with God was primarily that negative fear instead of love. May we never fall into that trap. It has ruined the lives of many throughout the centuries.

A reading from the Letter of Saint Paul to the Philippians
(Chapter 3:17-4:1)

Everyplace Paul went there was always controversy, not only with pagans but also with his fellow Jews who were still tied to the old ways of following the Law. That was true of the Philippians, so Paul refocused them on Jesus. “Their minds are occupied with earthly things. But our citizenship is in heaven, and from it we also await a savior, the Lord Jesus Christ. He will change our lowly bodies to conform to his glorified body. . . . Therefore, my brothers and sisters, whom I love and long for, my joy and my crown, in this way stand firm in the Lord.”

Paul, who had been a persecutor of Christians, was converted after having a personal encounter with Jesus several years after the resurrection. Paul then became the greatest of all the apostles, traveling Asia Minor and Europe, converting thousands of people to Jesus. Life was never easy for Paul but he never gave up, even when he suffered in body, mind, and spirit. May his powerful determination and courage be with us in our times of need and suffering.

A reading from the holy Gospel according to Luke
(Chapter 9:28b-36)

“Jesus took Peter, John and James and went up the mountain to pray. While he was praying, his face changed in appearance and his clothing became dazzling white. And behold, two men were conversing with him, Moses and Elijah, who appeared in glory and spoke of his exodus that he was going to accomplish in Jerusalem.” The role of a mountain is important here, because God gave the Covenant to Moses on a mountain as well. Peter, John, and James were asleep and suddenly awoke and saw the two great men standing with Jesus. Peter was so taken by the power of this experience that he wanted to stay on the mountain and make three tents, one for Jesus, one for Moses, and one for Elijah. Luke tells us that Peter “did not know what he was saying.”

Have you ever had a powerful spiritual experience in which you felt especially close to Jesus? Maybe, like Peter, you did not want it to end, but of course, it did end, and you went about your life. Jesus gave the apostles this extraordinary experience knowing that they would suffer with him throughout the whole of his crucifixion and beyond. If you have been blessed with a special experience of God’s presence, rejoice and be glad and allow it to strengthen you for your own suffering and help you to reach your own resurrection, whenever it may occur.