"Hear the Word!" by Bill Ayres: EASTER SUNDAY OF THE RESURRECTION OF THE LORD 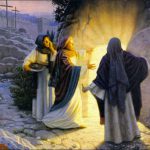 The Acts of the Apostles is regarded as a continuation of Saint Luke’s Gospel, completing the story of what happened after the resurrection. Peter speaks for the community and recounts the major events in the life of Jesus: his anointing with the Holy Spirit, his ministry of healing and other good deeds, his death and resurrection, and his appearance as the resurrected Lord, eating and drinking with the disciples. Peter wants everyone to know that he and the other apostles have been “commissioned” by Jesus to preach the good news and that “everyone who believes in him will receive forgiveness of sins through his name.”

Imagine how difficult all this was for Peter and the other apostles. They had lost their friend and leader in whom they had placed all their hope. They had given up everything to follow him, and then they lost him to a horrible death. They could have called it quits and returned to their former lives. There were probably many who encouraged them to stop risking their lives and lead a “normal” life, but they persisted. Why? Somehow, in ways we cannot understand, they still experienced the presence of Jesus. He was still there for them, and they continued to answer his call. Because of those relatively few courageous people, we have a community, a Church. Let us be thankful for them.

“This is the day the Lord has made: let us be glad and rejoice.” What do you rejoice in today and every day?

A reading from the Letter of Saint Paul to the Colossians
(Chapter 3:1-4)

A reading from the holy Gospel according to John
(Chapter 20:1-9)

It is surprising that in the deeply patriarchal society of the time, the author of this Gospel reports that the first person who learned that Jesus was no longer in the tomb was a woman. And it was the same woman, Mary Magdalene, who told the shocking news to Peter. When Peter and John entered the tomb, they get it. His body was not stolen. Something else happened. Now, their challenge was to convince the others that they were not out of their minds, that something else had happened that they could not yet explain.

There is no historical account of the resurrection itself. We know that it was not a resuscitation. The physical body of Jesus did die. The risen Jesus was different, but so real that the apostles and many others placed their faith in him and he in turn gave them and now us the presence of the Holy Spirit always present in our lives and in our Church, even in our darkest moments. It is a matter of faith. It is, in fact, the basis of our faith. HAPPY EASTER! HAPPY RESURRECTION! HAPPY NEW LIFE!