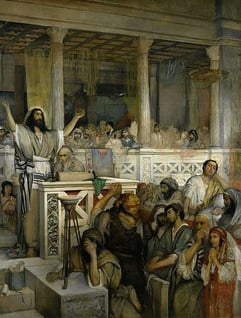 God has always sent prophets to guide his people, so Moses said, “A prophet like me will the Lord, your God, raise up for you from among his own kin; to him you shall listen.” But Moses knew that there would also be false prophets, so he warned the people, “But if a prophet presumes to speak in my name an oracle that I have not commanded him to speak, or speaks in the name of other gods, he shall die.”

Throughout the history of Israel, there were many false prophets but also many genuine prophets who truly spoke the word of the Lord and helped the people in their times of great need. Who are the true prophets and who are the false prophets in our world today? Who speaks the truth and who spews lies? Who calls for healing and reconciliation and who calls for violence and destruction? Whom can we trust in all the dimensions of our lives?

“If today you hear his voice, harden not your hearts.” Where and how does the voice of God speak to you? In prayer and in times of quiet, or in conversations with people you trust and sometimes, even with people you do not trust or respect but still have something that strikes you as true and important? The voice of God may come to us from many sources. Let us pray to discern which voices deserve to be heard.

All of this sounds as if Paul is disparaging marriage, and yet in other writings he is very positive about married love. What is going on here? We need to remember that Paul was not married and so he is looking at marriage from the outside. More importantly, he believed that Jesus was coming again soon and that the world as he knew it would be gone. It is true that many thousands of Christians were martyred by the Romans, including Paul, but the world went on and gradually people lost the fear about the world itself ending. They had enough fears about living under the harsh Roman authoritarian rule.

A reading from the holy Gospel according to Mark

This experience takes place at the beginning of Jesus’ ministry. There are two important dimensions to his visit to Capernaum. The first is that he is the real deal, he has authority: “On the sabbath Jesus entered the synagogue and taught. The people were astonished at his teaching, for he taught them as one having authority and not as the scribes.”

His words were powerful, but his actions even more so. “In their synagogue was a man with an unclean spirit; he cried out, ‘What have you to do with us, Jesus of Nazareth? Have you come to destroy us? I know who you are—the holy one of God!’ Jesus rebuked him and said, ‘Quiet! Come out of him!’ The unclean spirit convulsed him and with a loud cry came out of him. All were amazed and asked one another, ‘What is this? A new teaching with authority. He commands even the unclean spirits and they obey him.’ His fame spread everywhere throughout the whole region of Galilee.”

In ancient times, physical, mental, and emotional illnesses might be attributed to “an unclean spirit.” What is clear is that the people saw in Jesus a healer and because of that could at least begin to believe.

Throughout your life, have you sought some kind of healing or blessing from Jesus? Did it happen? Perhaps it did. Great! Give thanks! Or perhaps not, or so it seemed. But often, healing and other gifts are given, and we miss them. They might appear but not necessarily in the form or manner that we sought. You did not get the job you wanted or the life partner you believed was the right one. But that need not be the end of the story. There are new even more precious gifts in store for you if you stay in the Spirit.