'Hear the Word!' by Bill Ayres: Fourth Sunday of Advent 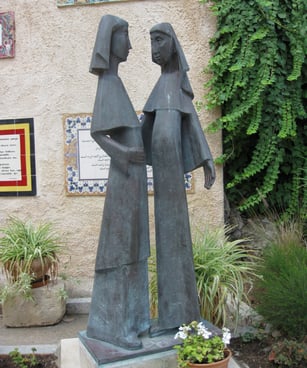 A reading from the prophecy of Micah

Throughout the church year we hear readings from the major prophets, such as Isaiah and Jeremiah, and from several of what are called the minor prophets—Zephaniah, Baruch, and Micah, the last of whom we encounter today. You may notice a common theme in these prophetic readings. The setting is a terrible time for the Hebrew people, usually an exile and period of persecution. But there is always a message of hope that God will save the people through a new leader, a messiah.

We believe that the savior the prophets foretold came in the person of Jesus. He believed it. He called the people together and proclaimed the reign of God beginning here on earth. Many people accepted and followed him, but the religious and political leaders did not. Jesus threatened their power. They wanted to destroy him, but they could only murder him, not destroy him.

“Lord, make us turn to you; let us see your face and we shall be saved.” That sounds wonderful, but how can we see the face of God? If we have the eyes of love and faith we can see the face of God in our loved ones, in our friends and partners, and in the faces of the faceless and forgotten in our society: the orphan; the elder in a nursing home without family; the single mom working two jobs, struggling to feed her children; and the person begging on the street—perhaps especially that person that is so easy to pass by. May we look more deeply into the faces of God’s children to see his face.

In ancient Judaism there was a tradition of making a series of “sacrifices and offerings” to God. Jesus says here that those gestures are no longer needed. He is the sacrifice and offering. We are saved “through the offering of the body of Jesus Christ once and for all.”

We can see how disturbing this was to the leaders of the temple. They were in charge of the “sacrifices and offerings” but now they were no longer needed. You can imagine how threatened they were by Jesus. Change is often hard. This change was too much for them to accept.

Just before this passage in his Gospel, Luke tells us that Mary heard from the angel Gabriel that she would bear a son. She does not know how, since she has “no relations with a man.” Yet, she accepts, she trusts God. In this reading, Luke tells us of her visit to her cousin Elizabeth who also is with child. Elizabeth says the infant, who would grow to be John the Baptist, leaped in her womb at the sound of Mary’s greeting. “Blessed are you among women,” Elizabeth declares, “and blessed is the fruit of your womb.” Somehow, she sensed that this was a baby like no other.

This is a brief dialogue between these two important women, but it says so much. Mary said yes to God when she had no idea what she was getting herself into. She received the greatest of gifts and accepted it, not knowing the pain and suffering it would bring.

I suspect that you believe, as I do, that the death of a child is the greatest loss a parent can endure. Both of these valiant women lost their children to ghastly murders, but that was not the end for either of them. Their loss was the gain for us all for eternity.

Often, saying yes to God is not easy, but the gifts of the Spirit can help us through. During these final days of Advent, let us reflect on what God has asked us to do that is most challenging in our lives and what gifts he is offering to help us on our journey into the mystery of his ever-present, everlasting love.

Photograph of statue at the Church of the Visitation in Ein Karem, Israel, is licensed under the Creative Commons Attribution-Share Alike 3.0 Unported license.