'Hear the Word!' by Bill Ayres: Fifth Sunday of Lent 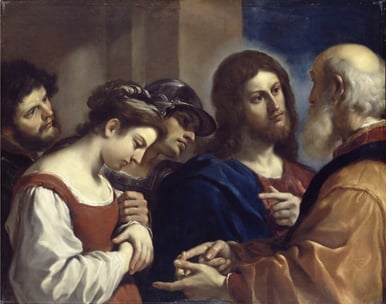 Isaiah is writing this toward the end of the exile in Babylon to give people hope amid great suffering. Through the prophet, God reminds the Israelites that he had the power over the waters as they escaped from Egypt, that he opened a path for the chosen people to pass and then closed it on the Egyptian army, destroying it. Now, as the people hope to return from exile, he will produce another miracle, putting water in the desert for the people to drink.

To understand this wonderful gift, we need to realize that the desert-like Mideast region that includes Israel today was a desert thousands of years ago when all these events happened. Without water there is no life. God, who is the source of all life, promises this gift of life to his people.

“The Lord has done great things for us; we are filled with joy.” What has God done for you or your loved ones that has filled you with joy? Sometimes, it is too easy to take God’s gifts for granted. How do you give thanks to God for these gifts?

A reading from St. Paul's Letter to the Philippians

“For his sake I have accepted the loss of all things and I consider them so much rubbish, that I may gain Christ and be found in him, not having any righteousness of my own based on the law but that which comes through faith in Christ, the righteousness from God, depending on faith to know him and the power of his Resurrection and the sharing of his sufferings.”

The Pharisees and Sadducees believed that salvation came from adherence to the Law of Moses. Paul and the early Christians believed that only faith in Jesus would save them, not keeping the hundreds of religious laws imposed on the Jewish people. That was heresy to the Jewish leaders and threatened their whole way of existence. Paul, who was previously called Saul, had been a strict follower of the Law, but he came to believe that everything he had been attached to was “so much rubbish … because of the supreme good of knowing Christ Jesus as Lord.”

How do you and I know Jesus as more than an important historical figure from the distant past? How do we see his crucifixion and resurrection as more than past events, as unique and dramatic as they may have been back then? How can we have a personal relationship with someone who is much more than a benevolent and even heroic historic figure? Who is Jesus NOW for us?

Knowing Jesus is both like and unlike knowing anyone else. On the one hand, we need to learn as much about him as possible and communicate with him in our prayer life. Yet, we only really know Jesus when we accept that he is a gift to us, coming TO us rather than we coming to him. He is always there, always present to us, even when we don’t realize his presence, when he may seem distant. Have there been times for you when you felt his presence powerfully but then felt that it slipped away? Maybe it was at a time of great rejoicing or a special insight or, more likely, at times when you were down, in need of support to climb out of some deep darkness or danger. Of course, it helps if you, can find time each day to say hello, to say “thank you” or “help me.” But the key thing is to know that the presence of Jesus in our lives is not dependent on our attention. His very Spirit lives within us at all times. Sometimes you can feel it or hear it. At most other times we simply need to trust that he is there.

Jesus is in the temple area, and people are coming to see and hear him. “Then the scribes and Pharisees brought a woman who had been caught in adultery and made her stand in the middle. They said to him, ‘Teacher, this woman was caught in the very act of adultery. Now in the law, Moses commanded us to stone such women. So what do you say?’ They said this to test him so that they could have some charge to bring against him. Jesus bent down and began to write in the ground with his finger. But when they continued to ask him, he straightened up and said to them, ‘Let the one among you who is without sin be the first to throw a stone at her. Again he bent down and wrote on the ground. And in response, they went away one by one. Then Jesus asks her ‘Woman, where are they? Has no one condemned you?’ She replied, ‘No one sir.’ Then Jesus said, ‘Neither do I condemn you. Go and from now on do not sin anymore.’ ”