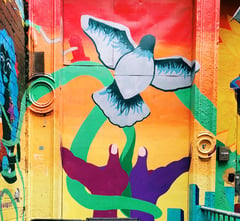 Let us try to imagine for a moment what it was like to be a Christian in the early years after the death of Jesus. The Romans targeted Christians as strange and possibly dangerous fanatics. Most Jews saw them as a danger to their faith and to their very lives if they were seen by the Romans as being at all sympathetic to this new movement. We know that Saul was a persecutor of Christians and that he had some sort of conversion experience on his way to Damascus where he had planned to help suppress Jesus’ disciples. Of course, people were afraid of him. He was a personification of the enemy, so Barnabas must have been well respected and trusted to get the community to accept the man now known as Paul.

It is amazing how someone we do not trust, someone we may even despise, can have a change of heart and become a friend or ally. Without Paul there would be no Roman Catholic Church as we know it. Redemption is possible, even for a persecutor, through the power of the Holy Spirit.

“I will praise you Lord, in the assembly of your people.” That is exactly what we are doing in church today and every day that we gather to celebrate the Eucharist.

John is writing this letter long after the death of Jesus. Remember that the early Christians believed Jesus would soon come again soon in, and the world would end. When that never happened, they had to rethink their whole belief system. How could they stay close to someone that few of them ever met? Saint John tells them that “the way we know that he remains in us is from the Spirit he gave us.”

Two thousand years later the same is true for us. We need to be in touch with the Holy Spirit that is within each of us. Unfortunately, most of us were never taught much about the Holy Spirit, especially about the presence of the Spirit within us. Try praying, talking to the very presence of God’s Spirit within you. It does not have to be a formal prayer or a formula. Just be quiet and open your mind and heart. Maybe nothing will happen right away. Don’t give up. Turn off your cell phone. Go to a peaceful place. Breathe deeply, over and over again. The Spirit is there within you.

It may seem strange to hear Jesus say, “I am the vine, you are the branches.” Remember, though, that he lived in an agricultural society, so the people who heard him understood these images. His key point comes later: “Remain I in me as I remain in you…. Whoever remains in me and I in him will bear much fruit, because without me you can do nothing.” Here we go again with interior presence. He is not just close to us. He is in us. We are united to him as a branch is to the vine. People of that time got it. I am not so sure we who are so removed from farming quite get it, but there it is. God in us. So, when you and I pray it is not as though we are trying to connect to some presence out there somewhere in heaven. No! The very Spirit of Jesus lives within us. Relax! Trust in the Spirit.

Photo by Jon Tyson on Unsplash.