Feast of the Transfiguration - "Listen to Him" 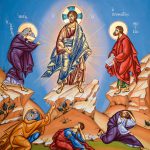 "Jesus took Peter, James, and his brother, John, and led them up a high mountain by themselves. And he was transfigured before them; his face shone like the sun and his clothes became white as light. And behold, Moses and Elijah appeared to them, conversing with him. Then Peter said to Jesus in reply, 'Lord, it is good that we are here. If you wish, I will make three tents here, one for you, one for Moses, and one for Elijah.' While he was still speaking, behold, a bright cloud cast a shadow over them, then from the cloud came a voice that said, 'This is my beloved Son, with whom I am well pleased; listen to him.' When the disciples heard this, they fell prostrate and were very much afraid. But Jesus came and touched them, saying, 'Rise, and do not be afraid.' And when the disciples raised their eyes, they saw no one else but Jesus alone" (Matthew 17:1-8).

The contrast between light and darkness plays an important part in the accounts of the Transfiguration in the Gospels. In this mystical episode, light—a brilliant, white light—is a sign of the divinity of Jesus. The three apostles, who saw Jesus not only bathed in this light but emitting it from his own person, were getting a privileged glimpse of the Reality—the presence of God in the world here and now—that transcends the usual experiences of human life.

Moreover, Peter, James, and John could see in this shimmering tableau the images of Moses and Elijah who had been faithful to God, who had served God’s people, and who, through the sacrifice of Jesus, would live in the glow of God’s presence—a promise the apostles might apply to themselves.

Pope Benedict XVI suggested in a homily that we all may experience something similar: “a momentary foretaste of what will constitute the happiness of Paradise. … usually brief experiences that are sometimes granted by God, especially prior to difficult trials."

This insight, this intuition, this awareness may occur during prayer, during liturgy, during reading and contemplation, during an exercise of charity or compassion.

How reassuring it would be if we could “see” God every day as the apostles saw him in the blazing light on Tabor, but Pope Benedict reminded us that our path in this life is illuminated by “the interior light that is kindled in us by listening to the Word of God."

- In what ways do you respond to the Father’s command regarding his Son: “Listen to him"?