Devotion to the Sacred Heart of Jesus 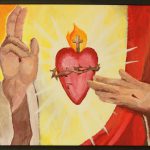 At an early age, I learned from my mother and grandmother that Jesus has a great heart and wants to embrace us in his love. They introduced me to devotion to the Sacred Heart. A picture of the Sacred Heart enthroned in the kitchen, where we spent most of our time, was a constant reminder. The devotion was further nurtured in me in our New York parish and school of St. Ignatius Loyola. One of our teachers, Miss Blanche Catherine Tintle, produced a large craft envelope on the first Thursday of every month and gave us each a Sacred Heart badge to wear to Mass the next day. I put it on and wore it proudly from that moment on. After school my mother took me to church to celebrate the sacrament of reconciliation. All this in preparation for “making the nine First Fridays,” a loving response to the great love of Christ poured out on us. On Friday morning, we celebrated Eucharist with the parish and received Communion. Because we had fasted since midnight, and I’m really dating myself here, we went to the Automat restaurant for breakfast with some of my classmates and their mothers and fathers. This breakfast was a special treat, a sign of our parents’ love. We were enthralled with the possibility of seeing so many options through the little glass doors, making a choice, putting in our coins, and retrieving the plate! After that, it was off to school for the day. At the end of the day, we returned the badges to Miss Tintle, to be saved for the following month.

Because I was a child, there were, of course, mixed motives behind my eagerness to participate in this monthly devotion. But what had penetrated deeply into my heart was the certainty that Jesus loves me and wants me to love others, so that in high school, I went on my own, satisfied with an apple for breakfast on my way to school.

When I entered the Sisters of St. Joseph of Cluny I discovered that we, too, have a tradition since the time of our founder, Blessed Anne Marie Javouhey, of devotion to the Heart of Christ. Making the “nine First Fridays” was a lot easier in a community that had Mass every day of the year, but the spirituality of welcoming the boundless love of Christ and reaching out to others in love became more and more a part of me. In fact, a friend, looking through my Bible one day, exclaimed: “You have a one-sided vision of God!” When I asked her what she meant, she said, “Well, just about everything you have underlined and highlighted in your Bible is about God’s love. You’ve missed the whole message about God’s anger and judgment!”

Perhaps I am a bit one-sided in focusing more on the love of God, but reflecting on God’s love and in particular on the love of Christ who became one of us and gave his life for us, urges me on to love him more and follow him more closely. I am deeply grateful for this understanding of God because God has always seemed very close to me in my life. Jesus is not only my savior but also my friend, my brother, the one who is always with me and with whom I can share everything. He’s also the friend and brother who gives it to me straight and doesn’t let me get away with anything, and he does it with love.

I believe the greatest testimony to the devotion we Cluny Sisters have to the Sacred Heart was given by former students gathered to celebrate the 50th anniversary of our presence in a parish school. After reminiscing about all the pranks they’d played on us, and the trouble they’d gotten into, they said, “but we always knew you loved us.”

The Solemnity of the Sacred Heart is one of our moveable feasts, coming 19 days after Pentecost. For me it stands as one more reminder of the assurance of Jesus, “I will be with you until the end of time,” as well as his command, “Love one another as I have loved you.”

Some background on the feast: From Scripture, we know that “God so loved the world that he sent his only begotten Son” (John 3:16), and that “God is love” (I John 4:16). In the early church there was no special devotion to the Heart of Christ. This devotion began later on, and was a private devotion for centuries. St. Margaret Mary Alacoque, a Visitadine sister, who lived in 17th century France, experienced visions of the Sacred Heart in which she was given the task of imparting new life to the devotion. Christ asked her to rekindle love in his people by assuring them of his love for them. He asked for a devotion of frequent Communion, Communion on the first Friday of the month, and the observance of the Holy Hour. The mission of propagating the new devotion was especially confided to the religious of the Visitation and the priests of the Society of Jesus.

In 1856, Pope Pius IX extended the feast to the universal church. On June 11, 1899, Pope Leo XIII, in what he called the “great act” of his pontificate, consecrated all humanity to the Sacred Heart.

Sister Marie is a member of the RENEW staff, a Sister of St. Joseph of Cluny, and the Project Leader for RENEW Africa.