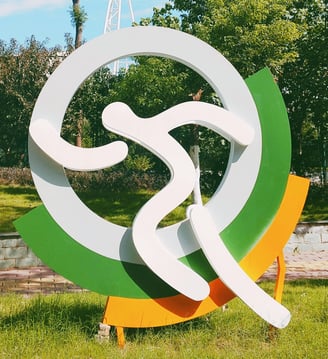 From the time children are quite young, they learn about competition. They play board games, sidewalk games, school playground games, and learn that there are winners and losers. As the children grow older, the competition becomes more varied and intense. This year, the Olympics reminded us of the joy and persistence of competition on many levels.

There are many rewards when we compete: trophies, certificates, money, notoriety, excitement, records to break, attention, self-satisfaction, and titles. Many athletes try to just beat their own best performance whenever they compete. From retailers’ points of view, advertising is a means of competing for consumers’ business.

While competition challenges us to put forth our best performances, it can also be overwhelming. Rivalry and egocentricity can cause some sinful tendencies. As in most areas of life, extremes can be sources of temptation. Balance in life is always a finish line for which to strive.

Fortunately, we don’t have to compete for God’s love. For example, we read in the book of Deuteronomy,

For the Lord your God is God of gods and Lord of lords, the great God, mighty

and awesome, who is not partial and takes no bribe, who executes justice for

the orphan and the widow, and who lives the strangers, providing them food and

In the Acts of the Apostles, we read,

Then Peter began to speak to them: “I truly understand that God shows no

partiality, but in every nation anyone who fears him and does what is right is

acceptable to him. You know the message he sent to the people of Israel,

And St. Paul cautions us in his letter to the Philippians,

Do nothing from selfish ambition or conceit, but in humility regard others as

better than yourselves. Let each of you look not to your own interests, but to

Whether they were competing or jockeying for position can be debated, but in Mark’s Gospel we read about the brothers, James and John, who asked Jesus if they could sit at his right hand and left hand when he was glorified. The other ten apostles were not happy with the duo’s request, and Jesus said,

[Whoever] wishes to become great among you must be your servant,

So much for competition! However if we were to approach competing in a different way, if we could challenge ourselves to better ourselves each time we have an opportunity to respond in a Christian way to the various needs of our brothers and sisters, competing could take on a holy dimension. Imagine competing to be the kindest, most generous, most loving person to the poor and needy around us. While there would not be judges in the stands or referees with stopwatches, we would know in our hearts whether or not we were out doing our best so far.

With Jesus as our Trainer, may we strive to break records in kindness and generosity in our world full of natural disasters and man-made catastrophes. On our mark, get set, grow in love!

Photo by Xuan Ming on Unsplash

The Scripture passages are from the New Revised Standard Version Bible: Catholic Edition, copyright © 1989, 1993 the Division of Christian Education of the National Council of the Churches of Christ in the United States of America. Used by permission. All rights reserved.