"Christ the Savior is born" 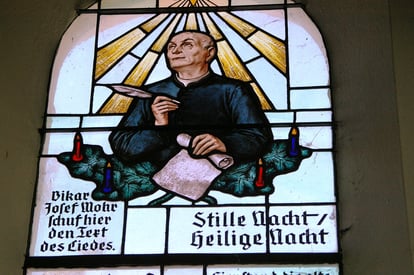 Joseph Mohr was born in Salzburg, in what is now Austria, in 1792 under inauspicious circumstances. His mother was an unmarried embroiderer, and his father was a soldier who hired himself out to fight for one of the many armies in the field in Europe in those days.
The father was also a deserter twice over—he deserted his army post, and he deserted his wife before she gave birth to Joseph.
The boy was lucky, though. The music director at the cathedral in Salzburg took an interest in him and saw to it that he got an education, and the young Joseph also sang and played the violin at a church and a monastery.
Joseph entered a seminary and, in 1815, he was ordained a priest; he served parishes in the region, including Orberndorf bei Salzburg. Joseph was serving at St. Nicholas parish on Christmas Eve in 1818 and was wishing he had an original song for the Nativity Mass
that night. So, he took a poem he had written and walked about two miles to visit his friend Franz Gruber, who was choirmaster at St. Nicholas. He asked if Gruber could set the poem to music in time for the Mass.
With very little time to think about it, Gruber produced a score for guitar and a two-part vocal score for a tenor and a bass. At Mass that night, Father Mohr was the tenor and guitarist and Francis Gruber was the bass, as the world heard, for the first time, the Christmas carol we know as “Silent Night.”
Joseph Mohr eventually served in the Alpine village of Wagrain where he established a fund to enable the children of poor people to attend school, and he set up a system to provide care for the elderly. The village school there is still named after him.
We can say with confidence that Christmas for Father Mohr was not about a song but about a way of life. When he died of pulmonary disease in 1848, he was virtually penniless, because throughout his priesthood he had donated most of his salary to charity.
Joseph Mohr’s connection to “Silent Night” was forgotten until 1995 when a manuscript, in his handwriting, was discovered. He didn’t write “Santa Baby,” “Jingle Bell Rock,” or “Have a Holly Jolly Christmas.” He didn’t become a member of ASCAP and receive a royalty check every time his song was played on Sirius Radio or in a shopping mall.
No, he wrote a lyric that has been translated into more than 300 languages and dialects, because it so well captures the reverence that should be inspired by the birth of Jesus. The event that we celebrate on Christmas was stupendous. A child was born who was unlike any other child, because he had both human nature and the divine nature; he was both human being and God.
But this event is also intimate and personal, for each one of us. By appearing on earth in the visible form of this child and the man he would grow to be, God invited human beings—invited all of us —to a real, tangible, loving relationship with him.
This was not God revealing himself by breathing thunder and lightning, by flooding the whole earth, by slaying the firstborn sons of Egypt and hurling Pharaoh’s army into the sea, or by obliterating Sodom and Gomorrah. This was God revealing himself in the irresistible form of an innocent, vulnerable, newborn child.
Because as Christians we first place our faith not in a God who threatens to destroy us but in a God who reaches out to love us—as a baby does—with no reservations or qualifications—and who calls on us to love each other in the same way—with no distinction based on gender, age, race, religious background, political viewpoint, or economic or social status.
That’s what was born, not on a day of earthquake, wind, and fire, but—as Father Mohr’s carol reminds us—on one silent, holy night.

The photo of the stained-glass image of Father Mohr is licensed under the Creative Commons Attribution 3.0 Unported license.

This post first appeared in The Catholic Spirit, the newspaper of the Diocese of Metuchen, where Charles Paolino, managing editor at RENEW International, is a permanent deacon..