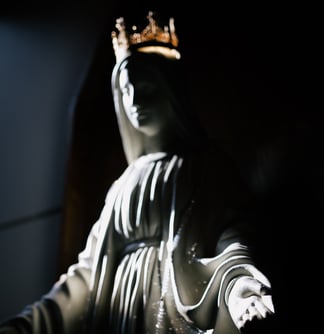 A reading from St. Paul's First Letter to the Corinthians

Think of yourself as a Christian convert living at the time of Paul. You have seen people in your community and maybe in your own family arrested and imprisoned and some even martyred because of their faith. Might you be next? But you have hope in the Resurrection of Christ. “Christ has been raised from the dead, the first fruits of those who have fallen asleep…. For just as in Adam all die, so too in Christ shall all be brought to life, but each one in proper order. Christ as first fruits; then, at his coming, those who belong to Christ.”

Over the centuries, millions of Christians have been martyred in the name of Jesus Christ. We can be thankful that that won’t be our fate, but we will all die some day and enter into the loving embrace of our brother Jesus. That is the beautiful fate we have been promised.

Mary travels to visit her cousin Elizabeth who was pregnant. “When Elizabeth heard Mary’s greeting, the infant (John the Baptist) leaped in her womb and Elizabeth , filled with the Holy Spirit, cried out in a loud voice and said, ‘Blessed are you among women and blessed is the fruit of your womb .’” That last line is familiar to most of us from the Hail Mary prayer which we learned as children.

And Mary said, “My soul proclaims the greatness of the Lord; my spirit rejoices in God my Savior for he has with favor on his lowly servant. From this day all generations will call me blessed: the Almighty has done great things for me and holy is his name…. He has cast down the mighty from their thrones and lifted up the lowly…. He has filled the hungry with good things, and the rich he has sent away empty.” Her words reflect the fact that God chose her, not someone wealthy or politically powerful, as the vehicle through whom the Divine would enter history in human form.

Luke and all the Gospel writers want to make sure that their readers and listeners know that Jesus, Mary’s child in the human realm, is much more than a new prophet and even more than just the Messiah, as important as that was. He is the Son, the only Son of God. That is what they believed and what we believe.

Photo by Grant Whitty on Unsplash