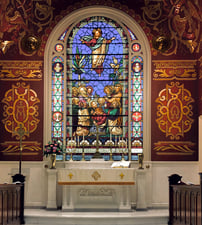 Speaking of exuberance, Paul was certainly in high spirits when he wrote this passage about what God has carried out in Jesus, “raising him from the dead and seating him at his right hand in the heavens, far above every principality, authority, power, and dominion, and every name that is named not only in this age but also in the one to come.” There was a time when people would bow their heads or remove their hats—if they were wearing hats—if they heard or spoke the name of Jesus. If we have lost that kind of exuberance over the holy name, let’s try to recapture it!

Aha! So Mark tells us the rest of the story: The apostles didn’t go on staring at the sky, and they didn’t go back to their former trades. On the contrary, Mark writes, “So then the Lord Jesus, after he spoke to them, was taken up into heaven and took his seat at the right hand of God. But they went forth and preached everywhere….” And God’s plan wasn’t that the preaching should stop when those apostles were gone, but rather that others should continue proclaiming the Good News of Jesus, raised from the dead—others including us, the apostles of the 21st century. That’s what the liturgy means when it tells us at the end of each Mass to “Go.” Go and preach the gospel.

Charles Paolino is managing editor at RENEW International and a permanent deacon of the Diocese of Metuchen, New Jersey.