2nd Sunday of Lent – Listening to Him 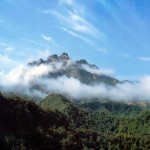 “Then a cloud came, casting a shadow over them; from the cloud came a voice, ‘This is my beloved Son. Listen to him.’ Suddenly, looking around, they no longer saw anyone but Jesus alone with them. As they were coming down from the mountain, he charged them not to relate what they had seen to anyone, except when the Son of Man had risen from the dead. So they kept the matter to themselves, questioning what rising from the dead meant”
(Mark 9:7-10).

This week’s Gospel reading offers us a brief look at God’s glory at a moment when Jesus was speaking of his coming passion, which was the focus of conversation immediately before and after the event described in this passage. Jesus had brought to this mountaintop several of the disciples, who had just learned that he would suffer, die, and, three days later, rise from the dead.. Jesus was transfigured before their eyes, and they were left awestruck. The voice of God proclaimed, “This is my beloved Son. Listen to him” (Mark 9:7).

The disciples were given a glimpse of the glory of God, and then were charged with the task of listening to Jesus. They listened even as he was rejected, as he suffered, and as he was put to death. They listened to Jesus and knew that even death would not defeat him, for he would be raised from the dead. The disciples continued to listen to the risen Christ until the day they too would share fully in his glory.

Just as the disciples were charged with the task of listening to Christ, we are also invited to listen. Through the events of our lives, however ordinary or extraordinary they may be, Christ is present and calling out to us. Christ is in our walking and talking, in our daily encounters, and in our travels.

Christ is present, but are we listening?

Christ often speaks to us through those who have no voice in our world. He speaks through the poor, the elderly, the prisoner, and the immigrant. We may listen to Christ speaking through our friends and family, but do we listen to Christ in the rejected, the lonely, and the outcast?

Where or how is Christ speaking to you at this point in your life? Are you listening?

Adapted from Word on the Go, a downloadable resource from RENEW International