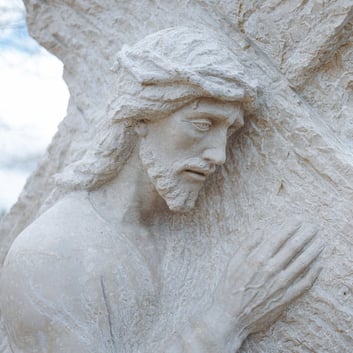 A reading from the Letter of James

We live in a very competitive society in which people are judged to be winners and losers. The winners are seen to be the famous, the beautiful people, the super-rich, and the powerful. So, where does that leave the rest of us? Are we all losers unless we break into the circle of the elite few?

James has a different set of standards. He says that wars and conflicts come because “you covet but do not possess.” He tells us that “wisdom from above is first of all pure, then peaceable, gentle, compliant, full of mercy and good fruits.” This is a far cry from what our media portray and many of the “winners” live out. We have a choice—whether we want to be seduced into being superficial winners or to live our lives in love, and true faithfulness to God and one another.

Jesus came to serve, not to dominate as many false leaders have done and continue to do. When he hears that the disciples were arguing about who among them would be the greatest, he calls the twelve aside and says, “If anyone wishes to be first, he shall be the last of all and the servant of all.”

Pope Francis is not simply trying to update the Church and change a few regulations. He is modeling the kind of leadership that Jesus lived: service, not domination. He speaks out strongly against the domination of women by men, including in the Church, domination of those who live in poverty by the super-rich and powerful, the misuse of the goods of the earth for the wealth of the few, and the domination of one race or religion over another. That was not the way of Jesus and Pope Francis calls leaders all over the world to practice a leadership that respects the rights of the millions who are poor, hungry, landless, refugees, prisoners unjustly condemned, children and the unborn, the sick and the elderly. He also calls on all of us to enjoy and take care of the beauties of our wonderful earth. Francis has changed the way people look at our Church, feeling a warmth and welcoming presence from a man who follows our Suffering Servant, Jesus Christ, the “just one.”

Photo by Wesley Tinley on Unsplash