1st Sunday of Lent – To Be Tempted 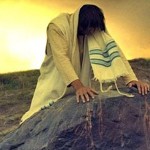 “At that time Jesus was led by the Spirit into the desert to be tempted by the devil. He fasted for forty days and forty nights, and afterwards he was hungry. The tempter approached and said to him, ‘If you are the Son of God, command that these stones become loaves of bread.’ He said in reply, ‘It is written: One does not live on bread alone, but on every word that comes forth from the mouth of God.’
Then the devil took him to the holy city, and made him stand on the parapet of the temple, and said to him, ‘If you are the Son of God, throw yourself down. For it is written: He will command his angels concerning you and with their hands they will support you, lest you dash your foot against a stone.’ Jesus answered him, ‘Again it is written, You shall not put the Lord, your God, to the test.’ Then the devil took him up to a very high mountain, and showed him all the kingdoms of the world in their magnificence, and he said to him, ‘All these I shall give to you, if you will prostrate yourself and worship me.’ At this, Jesus said to him, ‘Get away, Satan! It is written: The Lord, your God, shall you worship and him alone shall you serve.’
Then the devil left him and, behold, angels came and ministered to him" (Matthew 4:1–11).

We all know temptation. Temptations to be less than we were created to be, to take the easy way, surround us. If we believe that Jesus is not only fully divine but also fully human, we should not be shocked that even he was tempted. He knew what it meant to live on this earth, to eat and drink, to feel excitement and joy, frustration and fatigue. He knew what it was to love and be loved and to lose people for whom he cared. He experienced temptations to be less than who he was being called to be, and he was free to say yes or no, just as we are.

Jesus, like all of us, was tempted throughout his life. We see him being tempted, after the multiplication of the loaves, by the peoples’ acclaim and their determination to make him king, but he escaped from the applauding crowd. Later, he refused to play the magician for King Herod when Herod demanded miraculous acts. And in his agony in the garden, we see him confront and resist the temptation to run away from pain and suffering. We have in Jesus someone who was tempted like us in many different ways. And how did he respond?

Throughout his life, Jesus showed himself to be rooted in prayer, turning to the God the Father who was constantly with him. We see him throughout his ministry, especially in times of temptation, withdraw to pray on the mountaintop—to be in the presence of God, and to take time to reflect. But afterward, he returned to his community, to the people who accompanied and supported him in ministry. It was the support of prayer and community that gave him strength in the face of temptation.

Throughout our lives we are confronted with temptations to do such things as mistreating a sibling, lying about who broke the vase, plagiarizing someone else’s work, demeaning others to make ourselves look better. Maybe we are tempted to abuse alcohol or drugs to escape an unpleasant reality. If we look to the example of Jesus who rooted himself in prayer and drew strength from a supportive community we, like him, can overcome temptation.

Adapted from Word on the Go, a downloadable resource from RENEW International.