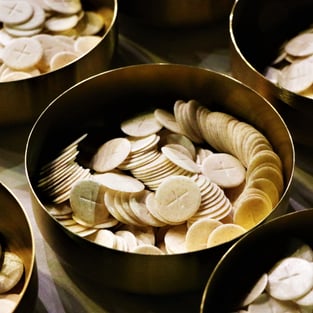 A reading from the Book of Exodus

The Israelites were in abject slavery in Egypt, but the power of God freed them. Of course, they were grateful, but soon they were stuck in a barren desert and were starving. As bad as slavery in Egypt was, they at least had food, so they complained to Moses and Aaron, “But you had to lead us into the desert to make the whole community die of famine.” God responded to this complaint by sending the people food in the desert. We have no historical evidence about how that happened or what that food consisted of, but the point of the story is that God is the source if all life, including food.

Today, most of us are fortunate enough to be able to purchase our own food. Still, we need to remember that God is the ultimate source of our food and that we have an obligation to help those who are hungry in our community and beyond. It is not as though we have to do it by ourselves. There are several national and local anti-hunger organizations that do amazing work, including WhyHunger, a national organization that the late Harry Chapin (who died 40 years ago last month) and I co-founded in 1975. This and other organizations not only feed people but help them to get out of poverty which is the root cause of hunger.

“The Lord gave them bread from heaven.” When we participate in receiving the Eucharist we are indeed partaking of the bread of heaven. It is easy to forget that, but as we receive Communion, it is something to reflect on. Let the Eucharist nourish our spirits in hard times and in times of joy.

There are several powerful statements in this reading, including “truth is in Jesus” and “put on a new self.” Have you ever wanted to start over, “to put on a new self”? You and I can do that, and the place to start is in Jesus where our deepest truth lies. We do not get only one or two chances in life but as many as we are able to ask for and accept. If you think you have had your chance but blew it, you are wrong. That is true for your family and friends, especially the most troubled. They should never give up, and you—we— should never give up on them. Jesus has not given up on anyone, and the “truth is in Jesus.”

Jesus never performed what is called an “authenticating miracle,” one performed to prove who he was. All of his miracles helped people in need, either physically or spiritually, or both. After the feeding of the multitude that we heard about last week, some people were impressed but wanted more proof. Jesus refused and told them that he had more than physical bread but rather “the bread from heaven”—foreshadowed by the food that fed the Israelites in the desert—that comes only from God. Then Jesus said, “I am the bread of life; whoever comes to me will never hunger.”

That is what the Eucharist is all about, being nourished by the very presence of Jesus. That is why we come to Mass each week or whenever we can, to be spiritually nourished. Do we need that? I know I certainly do, how about you? Many of us who are older were taught that we had to go to Mass every Sunday under pain of mortal sin. That was a negative reason built on fear. Let us come in joy to be filled with the healing, forgiving presence of Jesus Christ who is the bread of life.

Photo by Eric Mok on Unsplash