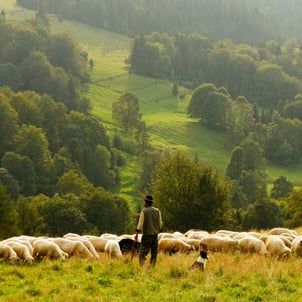 As we know, shepherds were very important people in a culture that depended on sheep for clothing as well as food. A good shepherd was highly valued, and so the Israelites often referred to their kings as shepherds. Jeremiah accuses these shepherd-kings of having driven the people away and “not cared for them.” “Woe to the shepherds who mislead and scatter the flock of my pasture, says the Lord.”

We often refer to bishops in our Church today as shepherds who are to lead us. Many do it well, but some in our country and around the world have not protected children and teens in their dioceses from abuse. Millions of people all over the world have left the Church in the past 30 years. There are many reasons but high among them is the anger people have toward abusive priests and those who closed their eyes to the crimes. Pope Francis has apologized for this laxity, promised to treat the matter seriously, and put mechanisms in place to do so.

“The Lord is my shepherd: there is nothing I shall want.” Jesus is the true shepherd who gives us unconditional love, forgiveness, and strength for all our needs. We need only to ask, to be patient, and to accept the gifts he gives us.

“Brothers and sisters: In Christ Jesus you who once were far off have become near by the blood of Christ.” We sometimes have an idealized picture of the early Church as peaceful groups of people being persecuted by the Roman government and cut off from their birth religion. Paul tells us throughout his letters that there were divisions and conflict in the early community, but what was most important was that Jesus had given them “access in one Spirit to the Father.” He did this by “abolishing the law with its commandments and legal claims.” What he is talking about is not the Ten Commandments but rather the hundreds of minor laws and dietary restrictions that kept people oppressed and always believing they were not good enough. These laws promoted the power of the very religious leaders who condemned Jesus and kept the people under their thumb.

Here we have one more example of the humanity of Jesus. He and the apostles were tired and hungry. He tells them to “rest a while,” but the crowds follow them and follow them again when they leave by boat. Then the other dimension of Jesus’ humanity kicks in. “His heart was moved with pity for them, for they were like sheep without a shepherd, and he began to teach them many things.”

It may sound strange today to call Jesus the good shepherd but the people of his time knew exactly what it meant. As we read in the prophecy of Jeremiah today and as we hear throughout the Hebrew Scriptures the shepherd is the true leader. Jesus had read or listened to the scriptures throughout his life before his ministry. He knew who he was and what his mission was. Being called and calling himself a shepherd was a sign of his authority and his love for his people. “For they were like sheep without a shepherd; and he began to teach them many things.” He continues to teach us today if we are willing to listen.