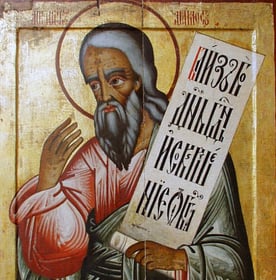 A reading from the prophecy of Amos

Isaiah, Ezekiel, Jeremiah and Amos were prophets who were rejected by their own people. Amos was rejected by Amaziah the priest of the important temple in Bethel. “Off with you visionary!” Amaziah told the prophet, but Amos refused. “The Lord took me from following the flock,” he said, “and said to me, Go, prophesy to my people Israel.”

Amos was especially concerned with the way poor people were treated by those in power. Most people in his time and place, in the eighth century BC, were poor, so he was most unpopular with the elite, because he spoke the truth to power no matter the consequences. He especially challenged people who thought of themselves as strictly religious but were unjust to those whom they considered inferior.

It is important to see Jesus as following the long tradition of Hebrew prophets whose messages of healing and warning were rejected. Jesus was much more than a prophet, but he certainly was that as well.

“Lord, let us see your kindness, and grant us your salvation.” When have you recently experienced the kindness of God? Perhaps it was in prayer, through the kind words of a loved one or help from a stranger or someone you hardly knew. God’s kindness comes to us in many ways through many people. Let us give thanks for God’s kindness and all those who share it with us.

Did Paul write this letter? The message is certainly very Pauline, and today scholars debate whether he wrote it or if it was written after he died by disciples who knew him and wanted to share his important message. Most of this reading is a hymn or recitation from the liturgy of the early Church, praising God and reminding the people of all that God has given them.

Our lives usually unfold on several levels at the same time—in our families, work, and friendships. On all levels, we receive gifts from God. Take some time this week to reflect on the gifts God has given you, not just the troubles and challenges you face. Often, those very gifts are what will help you through the hard times.

Being an apostle was not glamorous. The apostles had next to nothing and were dependent on the kindness of those they met along the way for food, housing, and anything else they needed. But they were given power, the power to heal and the power to forgive. Imagine that. This band of poor uneducated men who appeared to be no more than vagrants, homeless wanderers, had such great powers, the very powers that Jesus himself shared with those in need. “The Twelve drove out many demons, and they anointed with oil many who were sick and cured them.”

You and I have been called to be apostles as well. What special powers do you have? They are not magical powers but powers that can be exercised to serve others, starting with the power of love amid conflict or despite rejection. This includes the power to forgive offenses that arise due to anger or misunderstanding. Forgiveness is often thought of as a degree of weakness, but it is rather a sign of strength that comes from the Spirit within us. Is there someone that you should forgive? How can you begin what may be a challenging process?

Topics: Reflections on the coming Sunday's Gospel, Book of the Prophet Amos, call to discipleship, gifts from God, RENEW International