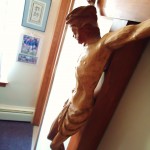 “When the sabbath came he began to teach in the synagogue, and many who heard him were astonished. They said, ‘Where did this man get all this? What kind of wisdom has been given him? What mighty deeds are wrought by his hands! Is he not the carpenter, the son of Mary, and the brother of James and Joses and Judas and Simon? And are not his sisters here with us?’ And they took offense at him. Jesus said to them, ‘A prophet is not without honor except in his native place and among his own kin and in his own house.’ So he was not able to perform any mighty deed there, apart from curing a few sick people by laying his hands on them. He was amazed at their lack of faith” (Mark 6:2-6).

Being rejected, questioned, and doubted were not new experiences to Jesus. Since the beginning of his public ministry, he was an open target of the religious leaders of the day. In this gospel reading, those whom Jesus lived and grew up with were the ones who rejected him. Their questions – “Where did this man get all this? What kind of wisdom has been given him?” – sounded more like suspicion and cynicism than awe.

Jesus’ human response to the crowd’s rejection is one of amazement. He brought them the good news of salvation, but the people would not hear it. His ability to work the same kind of miracles as he did for Jairus’ daughter was dramatically diminished. However, that did not stop him from doing the work he was called to do.

It is helpful to remember that we are not alone when we face rejection and misunderstanding from the people to whom we are closest. Jesus offers us the very grace he possessed so that we may carry on and be faithful to the work at hand.

Have you ever allowed yourself to be caught up in a “group reaction” to someone? If this were to happen in the future, how can you be prepared to respond in truth and love?