10th Sunday in Ordinary Time - Concern for the Neglected 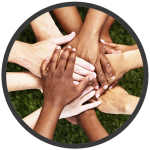 "Summoning them, [Jesus] began to speak to them in parables,'How can Satan drive out Satan? If a kingdom is divided against itself,that kingdom cannot stand. And if a house is divided against itself, that house will not be able to stand.And if Satan has risen up against himself and is divided, he cannot stand;that is the end of him. But no one can enter a strong man's house to plunder his property unless he first ties up the strong man. Then he can plunder the house.'
His mother and his brothers arrived. Standing outside they sent word to him and called him. A crowd seated around him told him, 'Your mother and your brothers and your sisters are outside asking for you.' But he said to them in reply, 'Who are my mother and my brothers?' And looking around at those seated in the circle he said, 'Here are my mother and my brothers. For whoever does the will of God is my brother and sister and mother'" (Mark 3:23-27, 31-35).

There is no evidence that Jesus had anything but the deepest love and respect for his mother. His question “Who are my mother and [my] brothers?” (Mark 3:33) is not a rejection of his earthly family, but rather a declaration that all who do the will of God are part of his family. By using the image of a family, Jesus provides an insight into the kind of relationship he expects among his followers. They are not to be like a kingdom or a house divided against itself, rather they are to carry out their mission as brothers and sisters. Jesus calls his followers to a collaborative ministry in which the unique, God-given gifts and talents of each person are respected and unselfishly put to the service of the whole.

The face of ministry in our Church continues to evolve. Pastors may not oversee numerous associate pastors as in the past, but especially in large parishes they do lead increasingly large and diverse staffs made up of deacons, religious sisters and brothers, and lay people. In addition to pastoral ministers trained in religious education, liturgy, music, and youth ministry, parish staffs often include business administrators,parish nurses, and a variety of support personnel. Staff members, in turn, work with a variety of volunteer ministers. The growth of these various ministries has often been called a sign of the Spirit’s work in the contemporary Church. When the ministers of a parish work collaboratively, the parish is usually full of life. When they don’t, the parish may be like the kingdom or the house divided against itself, which, Jesus says, “will not be able to stand” (Mark 3:25). May our parishes be among those that stand and thrive!

Are there people doing the will of God whom I am unwilling to accept as brothers and sisters of Jesus?