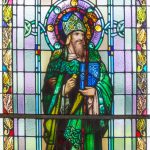 On this St. Patrick's Day, parades and parties have been postponed as we respond to the coronavirus. Yet it remains fitting to honor St. Patrick, to ask for his prayers, and to allow him to teach us the holiness we need at this difficult time.

St. Patrick was a very poor and humble man who lived in the fifth century. In his autobiographical Confessio, he calls himself “a sinner, a most simple countryman.” After having been taken captive from Britain to Ireland as a teenager, Patrick turned his heart toward the Lord and found his gift of preaching.

In the optional reading for the memorial of St. Patrick (1 Peter 4:7b-11), we receive encouragement about using our gifts of hospitality, preaching, and other service to one another to ultimately, and, most importantly, glorify God.

In the episode described in the optional gospel reading for the memorial (Luke 5:1-11), Jesus tells Simon Peter to cast his empty nets over the side of his boat, and Simon catches a phenomenal number of fish after a very unsuccessful night of fishing. He falls to his knees and, like Patrick, calls himself a sinful man. Jesus reassures Simon and tells him, “Do not be afraid; from now on you will be catching men.”

These readings fit well with the memorial of St. Patrick. In his Confessio, Patrick mentions that he had “baptized so many thousands of people”; he was catching men and women and sharing the Christian message by using his gifts of deep faith and preaching. Patrick refers to the story from St. Luke’s gospel and says, “It behooves us to spread our nets, that a vast multitude and throng might be caught for God.”

We have heard many times the story, perhaps the legend, that St. Patrick taught his listeners about the Holy Trinity by using the visual aid of the three-leafed shamrock, i.e., three leaves, yet one plant—three persons, yet one God.

It occurred to me that, during Lent, we could use the shamrock to remind us of other aspects of our faith. For instance, the three practices that can make for one Holy Lent are prayer, fasting, and almsgiving. The Sacrament of Reconciliation, one of the great sacraments of the Church, has three main components: confessing with sorrow, doing penance, and metanoia or turning away from sin after having received God’s loving forgiveness.

When we think of the culmination of Lent, the shamrock can remind us of the story of our redemption with the three components of the passion, death, and resurrection of our Lord, Jesus Christ.

What else can the shamrock represent for you this Lent? Maybe you have three favorite prayers or practices in your one morning prayer time? Maybe you can make three caring phone calls or texts in one day to reach out to the sick or lonely?

St. Patrick, pray for us all, whether we are of Irish descent or not. Thank you for giving us such a good example of sharing the good news of Jesus!