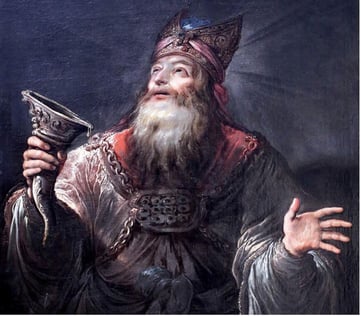 Earlier in this letter, St. Paul asks about the resurrection of the body: “How are the dead raised?   With what kind of body will they come back?” His readers knew it could not possibly the same physical body that they had on earth. That one was gone forever. ”Just as we have borne the image of the earthly one, we shall also bear the image of the heavenly one,” Paul wrote. His readers knew that Jesus was alive in a body much like theirs. Then, after his physical death, he came back to life, but in a glorified state no longer confined by time or space. Paul wanted his readers to know that as Jesus’ disciples they, too, would rise to a glorified new life with him. We are blessed with that same promise.

Many people in the early Church had trouble following the seemingly “crazy love” that Jesus taught. Here are some examples.

Jesus said to his disciples, “To you who hear I say, love your enemies, do good to those who hate you, bless those who curse you, pray for those who mistreat you. … Give to everyone who asks of you, and from the one who takes what is yours do not demand it back.”

He summed up this outlandish teaching with the so-called “golden rule”: “Do to others what you would have them do to you.” That rule can be quite challenging. It is easy to agree with this in the abstract, but often hard to apply when we experience conflict with others. Have you had that experience, or are you living with it now? Or do you know someone who is?

What a beautiful joyous image: “Gifts will be given to you.” Let us reflect on the gifts we have already been given, and rejoice.