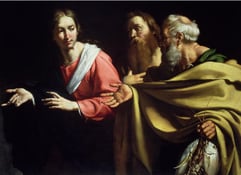 “Samuel was sleeping in the temple of the Lord where the ark of God was. The Lord called to Samuel , who answered ‘Here I am, you called me.’ ‘I did not call you,’ Eli said. ‘Go back to sleep.’ So, he went back to sleep.”

This happened again and then again, but eventually Eli understood what was happening, that it was God calling Samuel. So Eli said to Samuel, “Go to sleep, and if you are called, reply, ‘Speak, Lord, for your servant is listening.’”

Samuel went to sleep again and “the Lord came and revealed his presence.” “Samuel answered, ‘Speak, for your servant is listening.’ Samuel grew up, and the Lord was with him, not permitting any word of his to be without effect.” Indeed, he was one of the most important leaders in the history of ancient Israel.

Each of us must make decisions in life—some minor, some life-changing such as choosing a new school and a direction in life or deciding to marry and have children. How do you approach your callings and opportunities? Do you pray? And, most of all, do you listen to the Spirit who lives within you?

“Here I am Lord, I come to do your will.” Sometimes, it is certain what your path should be, but often, it is not clear. Is the voice of God coming directly to you in consciousness or dreams? How or through whom does the voice of God come to you? Can you say as Samuel said, “Speak, your servant is listening”?

Some of Paul’s converts thought that they could harm their bodies without harming their souls. Paul is very clear. “Do you not know that your body is a temple of the Holy Spirit within you, whom you have from God and that you are not your own? For you have been purchased at a price. Therefore glorify God in your body.” Sometimes, we forget that the Spirit of God lives within us. There are so many ways that we can fail to take care of our bodies. That neglect will affect our souls as well.

This story is about the calling of Peter, but it does not start with Peter: “John (the Baptist) was standing with two of his disciples, and as he watched Jesus walk by, he said, ‘Behold, the Lamb of God.’ The two disciples heard what he said and followed Jesus. Jesus turned and saw them following him and said to them, ‘What are you looking for?’ They said to him, ‘Rabbi,’—which translated means Teacher—where are you staying?’ He said to them ‘Come, and you will see.’ So they went and saw where Jesus was staying and stayed with him that day…. Andrew, the brother of Simon Peter, was one of the two who heard John and followed Jesus. He first found his own brother Simon and told him, ‘We have found the Messiah’—which is translated Christ. Then he brought him to Jesus. Jesus looked at him and said, ‘You are Simon, the son of John; you will be called Cephas’—which is translated Peter.’”

Peter, the leader of the apostles, was not the first to meet Jesus. Andrew met him first and saw immediately that Jesus was the one, the Messiah. So, Peter came to know Jesus through Andrew who met Jesus through John the Baptist. On one level, it seems to be a coincidence. Andrew just happened to meet John the Baptist, listened to him, and was so moved by his time with Jesus that he told brother Peter. That is where it all started. But there are no coincidences. There is a calling and a response.

We never know when we might be called to do something that may seem small but could have major consequences on our path to follow Jesus. I have never thought to pray to Andrew. Reading this passage now, after many years of reading and hearing it, I think I will have a conversation with Andrew who knew Jesus first.

May this year be blessed with better health and peace for all of us and our country and our world.