'Hear the Word!' by Bill Ayres: Solemnity of Jesus Christ the King 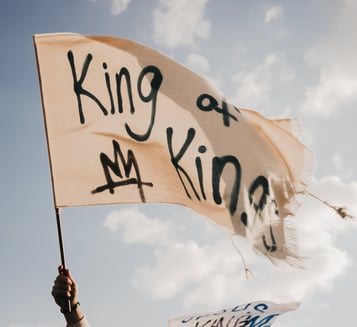 A reading from the prophecy of Daniel

Daniel refers to “one like a Son of man coming.” Whom did he mean? Remember, this book was written less than 200 years before the birth of Jesus. It was a time of horrible persecution, and this scripture was intended to give the people hope. The “Son” envisioned here was probably seen as God’s messenger who would herald the last days. The last days of what? Probably, it was the last days of the evil Seleucid King Antiochus IV which did come soon after. This Son of man would have been considered the messiah, a messenger sent by God to bring justice and peace.

“The Lord is king; he is robed in majesty.” The psalm proclaims the one God, the God of Israel, who always was and always will be—God, whom we encounter in an intimacy unknown to the ancients, through his Son, Jesus Christ.

A reading from the book of Revelation

Revelation is the last book of our Christian Bible and it, too, was written in a time of persecution, namely persecution of the Christian communities by the Roman Empire. But here the figure is none other than Jesus himself “who loves us and has freed us from our sins by his blood.” His crucifixion and resurrection have brought us salvation. Imagine how that gave hope to the struggling Christians of the time.

Today, we live in a world filled with terror and persecutions, most recently in Ethiopia but also in Nairobi, Syria, Iraq, Bali, Egypt, and Nigeria and on and on. It is a kind of international madness. On one level, our country must work with the world community of nations to prevent such horrors. In our own lives, let us pray daily for the conversion of the persecutors. That may seem hopeless, but years ago Catholics prayed every Sunday for the conversion of Russia and the freedom of hundreds of millions of enslaved innocent people. Some asked what good would prayer do, but we prayed anyway, and the walls of Communism eventually came tumbling down. Of course, it took decades and many political moves, but it did happen. Did prayer help bring down the Soviet empire or King Antiochus and change the hearts of the rulers of the Roman Empire? I would not bet against the power of prayer, in the world and in our own lives, even though the answer we seek does not always come easily.

Do you have one or more requests that you have been praying about for a while without an answer? Don’t give up. You never know when an answer will come, perhaps in a manner that you did not expect.

Pilate asks Jesus a trick question: “Are you the King of the Jews?” If Jesus answers yes, he is a condemned man, because he would be challenging the authority of Rome. But Jesus did not come to be a king in the sense the Pilate used the word, and so he evades the question. He does say, “My kingdom does not belong to this world.” In fact, his role and goal was to unite people in the “reign of God,” not in an earthly kingdom.

We live in a country that fought a revolution to free itself from the tyranny of the king of England, so “king” is not one of our favorite words. I suspect it would not be for Jesus either since his kingdom is not of this world. However, on this day we look beyond this world to Jesus in the heavenly kingdom to which we are all called.

Photo by Daniel Gutko on Unsplash.