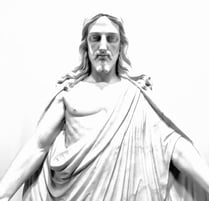 According to Mark’s account, Jesus promised amazing things to the apostles. They did not have to worry about demons, snakes, deadly drink, or language barriers. They would be able to lay hands and heal the sick in Jesus’ name. And Jesus promised he would always be with them. Always!

Now, what about that power they were to expect from on high? That Holy Spirit, that Advocate who, Jesus promised, would fall upon the disciples, would be coming after Jesus had physically left them. Did they have any idea of the great power and grace the Holy Spirit would bring to them? Do we really have any idea of the great power the Holy Spirit will give to them, and to us? When we think about it, I am sure we can recall the Spirit’s presence and inspirations in our own lives already! Credit where credit is due!

The disciples went to Galilee as Mary Magdalene and the other Mary had told them to do. They saw Jesus and fell down in worship. After making his promises to them, he was going to leave them! However, that wouldn’t be the end! Two men in white robes appeared and told them Jesus would come back some day just as he left them to go into heaven. What a day! The apostles had no idea when they woke up that morning that they would witness the Lord’s ascension! Jesus had gone to sit at the right hand of the Father and would empower them, and us, through the Holy Spirit, to do marvelous deeds, to bring others to hope and joy with the good news of Jesus’ redemption of all who believe!

I have heard the story of the Lord’s Ascension many times, but when I take my time and compare the different writers’ accounts, I see that there is so much going on in just a few chapters! And we can anticipate what we know was coming very soon, the feast of Pentecost, the coming of the Holy Spirit! Praise the Lord who has the best plans ever! Alleluia!