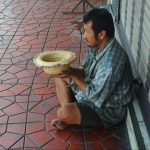 “The Lord is a God of justice, who knows no favorites. Though not unduly partial to the weak, yet he hears the cry of the oppressed. The Lord is not deaf to the wail of the orphan, nor to the widow when she pours out her complaint. … The prayer of the lowly pierces the clouds; it does not rest till it reaches its goal.”

The Hebrew Scriptures express the Jewish people’s historic sense of responsibility to the poor and oppressed, especially orphans and widows. Jesus shared that passion, as do we who are his followers. We recognize that food is a human right and that hunger anywhere is unjust, including our country, the richest in the world. That is why we in our parish help to feed the hungry. But we must also realize that the root cause of hunger is poverty and the root cause of poverty is powerlessness, so we also support programs that help people to get out of powerless situations through counseling and help in finding a job that pays a living wage. At the same time, we understand that powerlessness also comes from sexism, ageism, racism, and economic injustice which we must not have in our own lives.

How can you and I try to “hear the cry of the oppressed” and work for true charity and justice?

“The Lord hears the cry of the poor.” When have you heard the “cry of the poor?” Have you really listened? How have you responded? Is there anything more that you can do to help one person or family that is poor? Support your parish’s efforts to reach out to the poor or support another organization that is doing good work to help poor people? Learn about how various government anti-poverty programs work?

Paul is in prison, suffering deeply and nearing execution: “I am already being poured out like a libation, and the time of my departure is at hand. I have competed well; I have finished the race; I have kept the faith.” Let’s hope that you and I remember those powerful words and can say something like that at the time of our deaths. And let us also remember, “The Lord will rescue me from every evil threat and will bring me safe to his heavenly Kingdom.”

A reading from the holy Gospel according to Luke
(Chapter 18:9-14)

Here we have another parable that is both shocking and right on target: “Jesus addressed this parable to those who were convinced of their own righteousness and despised everyone else. … Two people went up to the temple area to pray; one was a Pharisee and the other was a tax collector.” So, one would have been considered the “good guy” and the other—the tax collector—was definitely the “bad guy.”

The Pharisee says, “O God, I thank you that I am not like the rest of humanity—greedy, dishonest, adulterous—or even like this tax collector. I fast twice a week and I pay tithes on my whole income.” Of course, he may also be taxing the poor and oppressed without justice or mercy. “But the tax collector stood off at a distance and would not even raise his eyes to heaven but beat his breast and prayed ‘O God, be merciful to me, a sinner.’” Jesus gets the picture and responds: “I tell you, the latter went home justified, not the former; for whoever exalts himself will be humbled, and the one who humbles himself will be exalted.”

What does it mean for us to be truly humble? It is not about poor self-esteem or putting ourselves down. It is rather about being thankful for all the gifts we have been given, not only material gifts but the gifts of health, loving friends, and family, the ability to make a living.

Do you often think about all the gifts you have been given by God, and give thanks? There, that’s true humility.