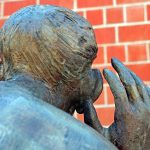 We are way back in the eighth century B.C., and the Assyrian army has taken over the two provinces Zebulun and Naphtali. Isaiah says that darkness covers the land, but now, “The people who walked in darkness have seen a great light; upon those who dwelt in the land of gloom a light has shown. You have brought them abundant joy and great rejoicing, as they rejoice before you as at the harvest, as people make merry when dividing spoils. For the yoke that burdened them, the pole on their shoulder, and the rod of their taskmaster you have smashed.” The Assyrians were terrible rulers, but now God has spared his people from domination.

Today, countless millions of the poorest people on earth are under the rule of despotic powers, and millions more in more developed countries such as Russia, Iran, and Brazil live in dictatorships where democracy is being strangled. Let us be thankful for our democracy and the Constitution that protects us, and not take these gifts for granted.

There are real divisions within our Church throughout the world and right here in our country. As we hear from St. Paul today, this is nothing new. He beseeches the Corinthians, “I urge you, brothers and sisters, in the name of our Lord Jesus Christ, that all of you agree in what you say, and that there be no divisions among you, but you be united in the same mind and in the same purpose. For it has been reported to me about you, my brothers and sisters, by Chloe’s people, that there are rivalries among you. I mean that each of you are saying, ‘I belong to Paul’ or ‘I belong to Cephas’ (Peter) or ‘I belong to Christ.’ Is Christ divided? … For Christ did not send me to baptize but to preach the gospel, and not with the wisdom of human eloquence, so that the cross of Christ might not be emptied of its meaning.”

As we know, there were real differences among the apostles and the various Christian communities, and yet, they stayed together. They worked out their differences. That is our challenge today, as it has been for Christians throughout the past twenty centuries—to work out our differences without bad mouthing the other side, and to focus on the great truths we all believe in that bind us together.

A reading from the holy Gospel according to Matthew
(Chapter 4:12-23)

Matthew tells us that when Jesus hears that John the Baptist has been arrested, he moves to the same land that we read about in the prophesy of Isaiah, the land of Zebulun and Naphtali, saying, “The kingdom of heaven is at hand.” And Matthew reports that as Jesus “was walking by the Sea of Galilee, he saw two brothers, Simon who is called Peter, and his brother Andrew, casting a net into the sea; they were fishermen. He said to them, ‘Come after me, and I will make you fishers of men.’ At once, they left their nets and followed him. He walked along from there and saw two other brothers, James, the son of Zebedee and his brother John. They were in a boat, with their father Zebedee, mending their nets. He called them and immediately they left their boats and their father and followed him.”

So, that is how it all started—poor, uneducated fishermen were somehow moved to make a radical change in their lives. Obviously, Matthew gives us only the short version of these conversations. There must have been much more said, but Matthew wants us to feel the immediacy and power of the call from Jesus.

You and I have a “call” from Jesus, not just once, but throughout our lives. We refer to it as a vocation, but not long ago that word, “vocation,” applied in popular use only to people who were called to priesthood or religious life. Now, we know that it is a call to each of us, perhaps several different and related calls. In any case, it is a call to serve others—as wife, husband, father, mother, sister, brother, friend, partner. Do you see your life as a response to a call from God, perhaps several calls at different times? Ask yourself if you feel called, if your life is a response to calls from God. Your calls are gifts as well as challenges. Have you said yes? It is never too late.