"Hear the Word!" by Bill Ayres: The Epiphany of the Lord 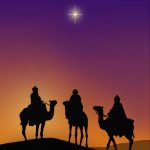 A reading from the Book of the Prophet Isaiah
(Chapter 60:1-6)

Light and darkness are two of the great biblical images. In this reading, Isaiah is telling the people of Israel that “your light has come.” Although “darkness covers the earth,” God will bring light to the whole world through Israel.

The word “catholic” means universal. We are part of the Catholic Church, a universal church whose light and presence should touch the whole world. Pope Francis is a truly catholic—that is universal—leader. He preaches and lives a life of peace, concern for the poor and forgotten and a broad, welcoming message. He sees the Catholic Church not as some exclusive club but rather as a warm loving embrace for all. He believes that our mission is to all, and we should welcome all, be a light for all, not an obstacle.

Isaiah was preaching this message at a most challenging time for the people of Israel—the exile in Babylon—when their world had been turned upside down and they endured great suffering. He came with a message of hope. Pope Francis has that message of hope for us and for all people.

“Lord, every nation on earth will adore you.” The psalmist knew when he wrote this, thousands of years ago, that it was not true but, he prayed that it would be someday, as we do today.

Paul talks about the mystery that has been revealed and writes that it is not only for Jews but for Gentiles as well. It is an inclusive message, a universal mystery. This may seem obvious to us, but it was the occasion for the first major division in the early Church. There were many, including Saint Peter for a while, who thought the new Church was only for Jews. Imagine that: our first pope was wrong about a crucial truth and was big enough to admit it and move on.

A reading from the holy Gospel according to Matthew
(Chapter 2:1-12)

Who were these men? Scholars have speculated about their identity for centuries. There are several theories, but the real importance of the visitors is that they represent the Gentiles, the wider world beyond Judaism. Jesus came for all, no matter where they come from or what their religion is. His appeal and call are universal.

The other significant figure here is Herod, the prototype of the bad king, the selfish ruler who thinks only of himself and will do anything, including mass murder, to protect his position. Of course, Herod’s plan to have the newborn king killed fails, and although Herod’s son plays a role in the death of Jesus, Jesus by then has grown into a charismatic healer who attracts large masses of followers and proclaims a message that is truly life giving.

This is a classic story of the seemingly powerless overcoming powerful evil rulers. It is a great model for our time when we have seen numerous despotic rulers rise and then fall before the power of the powerless.